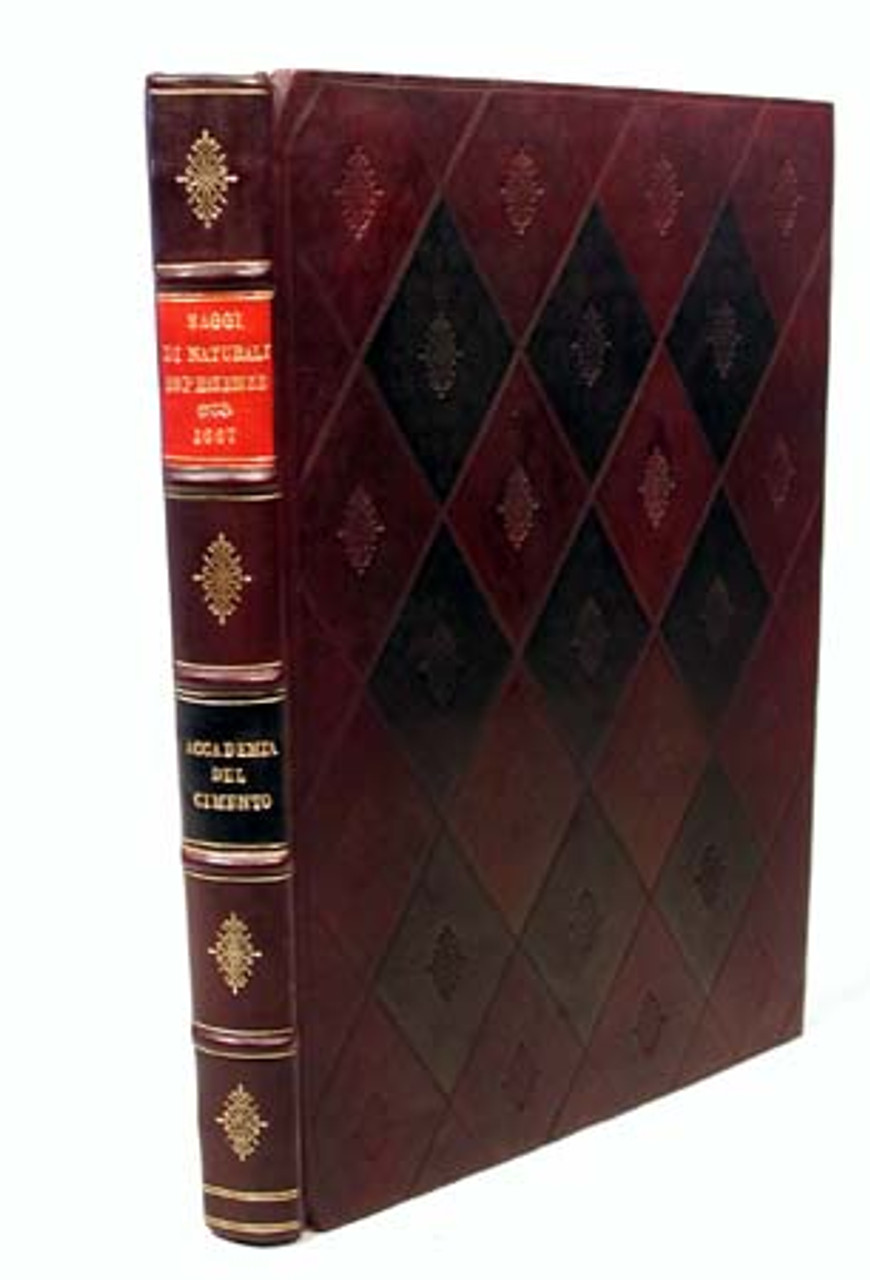 Ist edition published in 1666 and 1667 with a total edition of 800 copies. The Saggi di Naturali Esperienze fatte nell'Accademia del Cimento was the only publication of the Academia Del Cimento. The Academia (founded in 1657) was the first to be founded for the purpose of conducting mathematical and scientific expermients. Founded by the Grand Duke Ferdinand II of Tuscany and his younger brother Leopold de'Medici, represented a direct challenge to the deductive methods of contemporary science by pursueing experimentation similar to that of Gallileo (1564 1642) and his students Evangelista Torricelli (1608-1647) and Vincenzo Viviani (1621-1703). Prince Leopold provided th members with the first well equipped physical science laboratory in Europe. Although active for only a decade the Academy had a profound influence on experimental scientific methods and equipment for over a century. The group was led by the polymath Giovanni Alfonso Borelli,; Vincenzio Viviani, a pupil of Gallileo and Torricelli. The earliest members included the naturalist Francesco Redi, the anatomist and geologist Niels Steno, the astronomer, Gian Domenico Cassini, the writer Lorenzo Magalloti (who also edited this volume). Following an Academy policy of hiding members individual identities in order to present itself as a group the work was published anonymously. The book encountered notable success. In 1684 the first English translation by Richard Waller was published. The efforts of the Accadèmia del Cimento had a great influence on the growth of experimental science elsewhere and created new confidence in methods initiated by Galileo. The Saggi di naturali esperienze fatte nell'Accademia del Cimento presents a synthesis of the experimental work carried out for over a ten-year period including: the first description of a true thermometer, the first true hygrometer, an improved barometer, experiments on air pressure, the velocity of sound, radiant heat, phosphorescence, the first experiments showing the expansion of water in freezing,, and the discovery of the deviation of a pendulum from its true plane of oscillation. This experimental data was later used by Foucault as proof of the rotation of the earth.