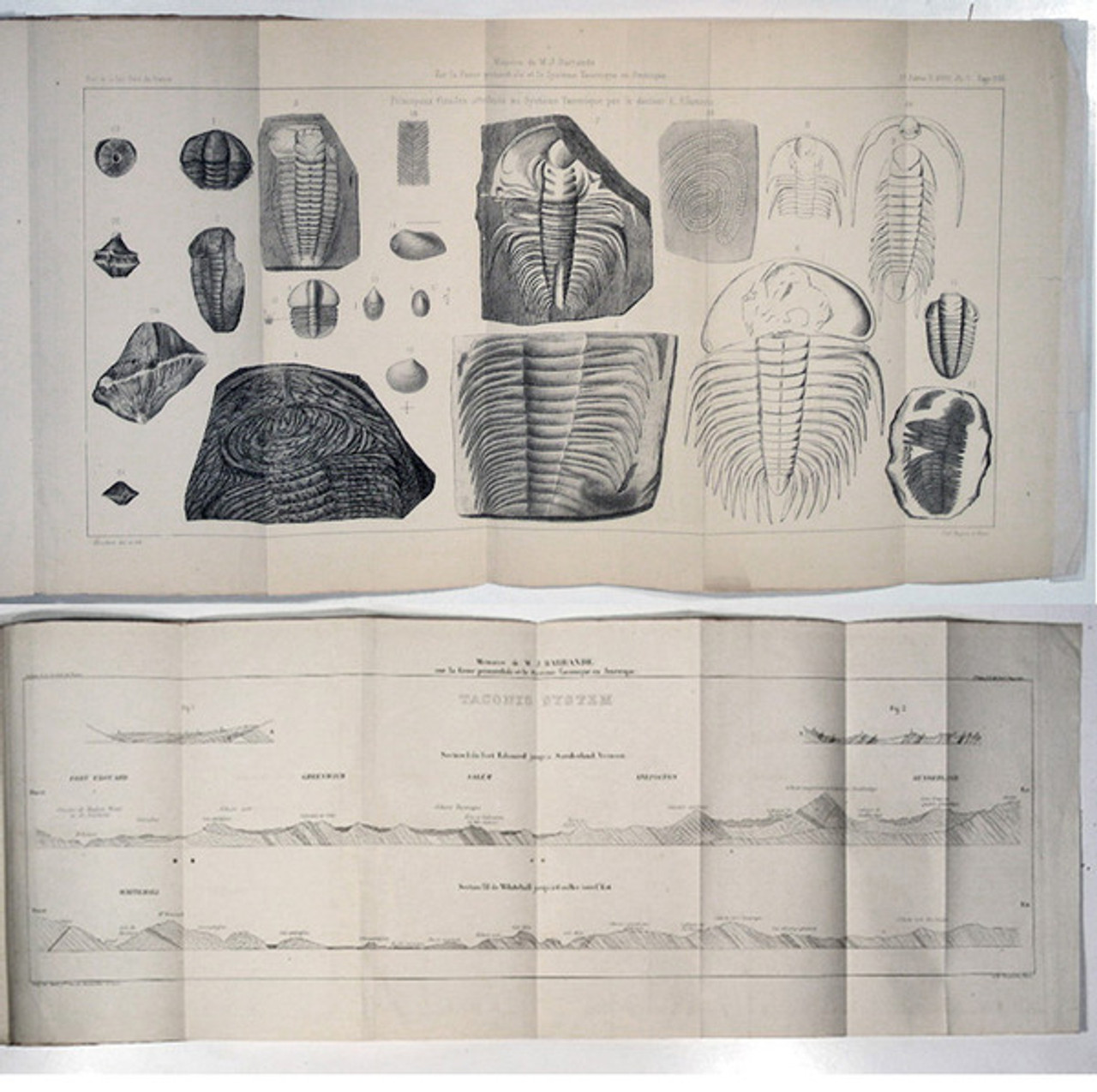 The work is complete and in the original plain brown paper wraps with later title label.. The binding is clean, text is uncut, light wear to outer margin of one plate repaired with Japanese tissue. Ownership signature of noted paleontologist B. F. Howell of Princeton on cover. In very good condition.


Joachim Barrande (1799-1883) was born in the Provencal Province of France. Barrande originally studied at College Stanislas in Paris and in 1819 he was admitted to the École Polytechnique. Upon graduation he studied bridge and road engineering at the École des ponts et chaussées from 1821 to 1824, and graduated as a civil engineer. At the same time, Barrande studied natural history, attending lectures and reading the works of such noted scientists as G. Cuvier, J. B. Lamarck, A. d´Orbigny, A. Brongniart, C. Prévost, H. de Blainville, E. Geoffroy-Saint-Hilaire and others. He was particularly influenced by Cuvier and Brongniart and he was to devote his life to paleontology and stratigraphy.
In 1826, Barrande was introduced to the Duke of Angouleme and was offered a position as a science tutor for the royal court of France. The July revolution in 1830 tied Barrande with the royal family and the royal court (Barrande included) was forced to emigrate and took refuge in Edinburgh, Scotland. It was in Edinburgh that Barrande became acquainted with the initial research of the Lower Palaeozoic rocks of Great Britain, especially Murchison,s work. In 1832 the royal family left Scotland, and with the help of  the Austrian-Hungarian emperor Franz II moved to Prague where Barrande was to devote much of his life’s work.
In Prague Barrande developed further contacts within the scientific community, making use of these contacts and acknowledged that help and assistance during the research in the first volume of his fundamental work ”Systême Silurien du centre de la Bohême”. Barrande spent countless hours in the field in Central Bohemia. He discovered new fossil localities, he drew very accurate geological outcrops and a schematic geological section of central Bohemian Palaeozoic formations appeared for the first time in Barrande´s field notebook in 1844 clearly showing that Barrande had a clear idea of geological structure and stratigraphy of the region. He accurately showed Precambrian and Palaeozoic sediments, and determined their succession as ”étages”), designated A to G. Today these ”étages” represent the Precambrian (A), and the Cambrian (B, C), Ordovician (D), Silurian (E), and Devonian (F, G, H) systems.
Thoughout his life Barrande built his large collection of fossils, which he added to with rich comparative material from abroad which he obtained in exchange for Czech finds. In 1847 he sent 240 fossils to L. Agassiz at the Museum of Comparative Zoology, Harvard and in 1875 followed with 4867 more specimens. For 33 years he continued to publish volumes of his 22 tome Systême Silurien du centre de la Bohême”.
In addition to his studies in Bohemia, Barrande published important studies on the paleontology and stratigraphy of other regions. His study of the Taconics in eastern New York and western Vermont is one such example. Barrande supported the designation of Taconic which had first been introduced by Emmons of the New York Survey. This work is very scarce in offprint form and is not often seen inscribed by Barrande. Barrande provides an overview and description of the Taconic System of Emmons in eastern New York and western New England and its fossils and includes a plate with a geological profile across the region and a plate of trilobites.