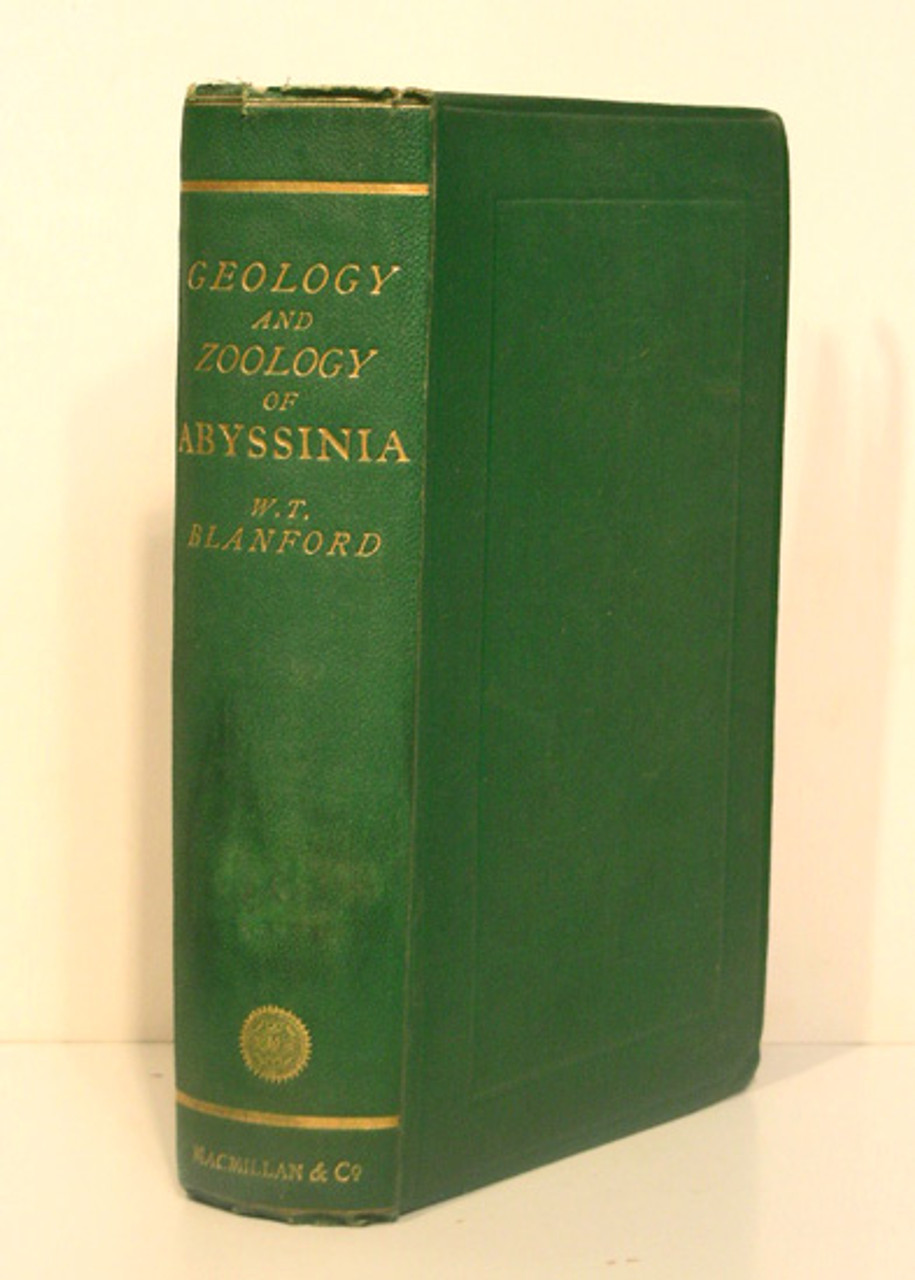 Blandford, William Thomas; Observations on the Geology and Zoology of Abyssinia, made during the progress of the British Expedition to that Country in 1867-68. Macmillan, London., 1870. First edition, quarto, pp. xii, 488 folding tinted lithograph frontispiece, 12 plates including 6 colored lithographs bird plates by Keulemans, folding colored geological map.

The text is complete and in the original green cloth with gilt spine titles. The binding is tight, smudge mark on lower spine where call-number was removed. Book plate of noted U.S. geologist Josiah D. Whitney on paste down and smaller plate removed from upper margin of paste down and pocket removed from rear. The text is exceptionally clean and bright. In very good condition.

An important work by the noted geologist and zoologist William Thomas Blanford who was attached to the Abyssinian Expedition in 1867 and accompanied the troops to Magdala. (The region is the highlands area of Ethiopia.) The plates by Keulemans are very attractive and feature six species which were new to science. Blanford (October 7, 1832 – June 23, 1905) was an English geologist and naturalist. In 1851 he was entered the newly established Royal School of Mines (now part of Imperial College London) and studied under De la Beche, Lyon Playfair, Edward Forbes, Ramsay, and Warington Smyth. He then spent a year in the mining school at Freiburg, and late in 1854 was posted to the Geological Survey of India where he remained made major contributions to the geology of India and remained for twenty-seven years, retiring in 1882.
For his many contributions to geological science Blanford was in 1883 awarded the Wollaston medal by the Geological Society of London. For his labours on the zoology and geology of British India he received in 1901 a royal medal from the Royal Society. He had been elected F.R.S. in 1874, and was chosen president of the Geological Society in 1888.
His principal publications in geology were: Observations on the Geology and Zoology of Abyssinia and Manual of the Geology of India, with H. B. Medlicott.
Part 1 of his work on Abyssinia is Blanford's personal narrative. Part 2 is devoted to the geography, stratigraphy, geology, volcanics and paleontology. Part 3 covers the zoology and includes the beautifully rendered colored plates of birds.