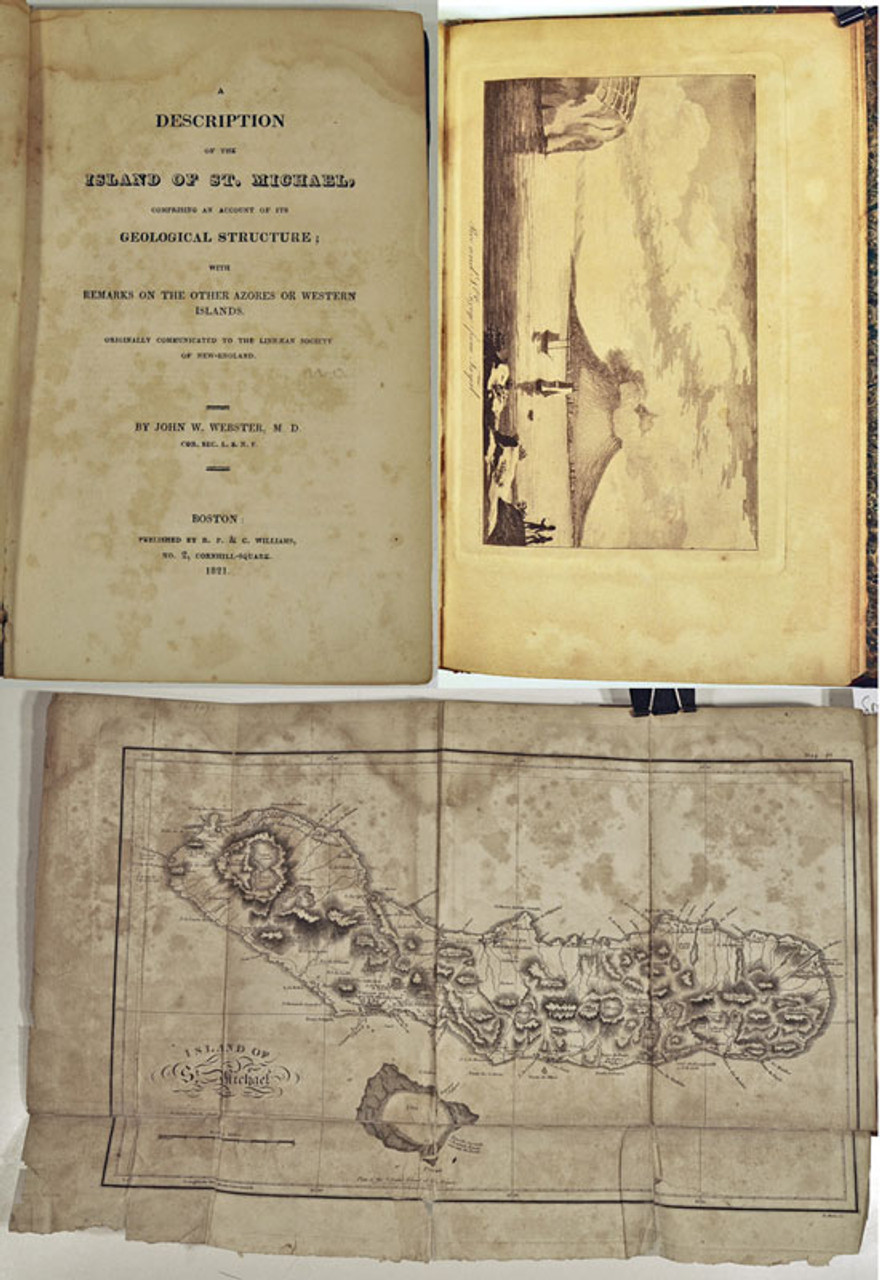 The book is complete and in a contemporary calf over marbled boards with gilt titles and panels.  Binding is scuffed, inner hinges nicely re-enforced. Light to moderate foxing with light damp staining to text, map and plates. Map repaired at verso of folds. In good condition.

An American mineralogist and popular lecturer Webster (1793-1850) was a Professor of chemistry and mineralogy at Harvard. He was also a Doctor of Medicine and a Member of the American Academy of Arts and Sciences, the London Geological Society and the St. Petersburg Mineralogical Society. He was the author of several works on geology and chemistry and had achieved some fame for his study of the Azores.
However he is best remembered for his trial and conviction for the murder of Dr. Geroge Parkman  a sixty-year-old physician and former anatomy professor at Harvard. The murder occurred on November 23, 1849, Parkman was also a wealthy Boston "brahmin" with an estimated worth of half a million dollars. Parkman was friends with John Adams, second President of the United States, artist John James Audubon, and General Lafayette, hero of the Revolutionary War. His murder and the trial of Webster was considered the major event in Boston in 1849-1850.
Dr. Parkman also owned many tenement buildings on which he collected rents and it was also his habit to lend money.  He kept strict track of his accounts and did not tolerate delinquent accounts.
Webster had higher social aspirations for himself and his family than he could ever afford and borrowed money to try to maintain the standards and allusion of wealth. Webster had put up his household furniture and his cabinet of valuable mineral specimens and rare books as collateral for the loan of $483.64 from Parkman.
On November 23, 1849, as Parkman was attempting to collect payment from Webster, Webster struck Parkman a fatal blow to the head with a piece of firewood. Webster then used his medical instruments to dismember Parkman's body and burnt most of the body in the lab furnace.  There was no eye witness to this event, but Webster’s own suspicious behavior led to his arrest on November 30, 1849. His Trial began in March of 1850.  On March 30th the jury found him guilty, and he was hanged on August 30th.  Webster's trial was one of the first murder convictions based on the testimony of the medical experts and other evidence produced by the prosecution that established guilt beyond a reasonable doubt.
Webster's study of the Island of St. Michael includes a description of the island's geography, towns, population, climate, geology, stratigraphy, volcanics, caverns, hot springs, and mineralogy. The work is quite rare.