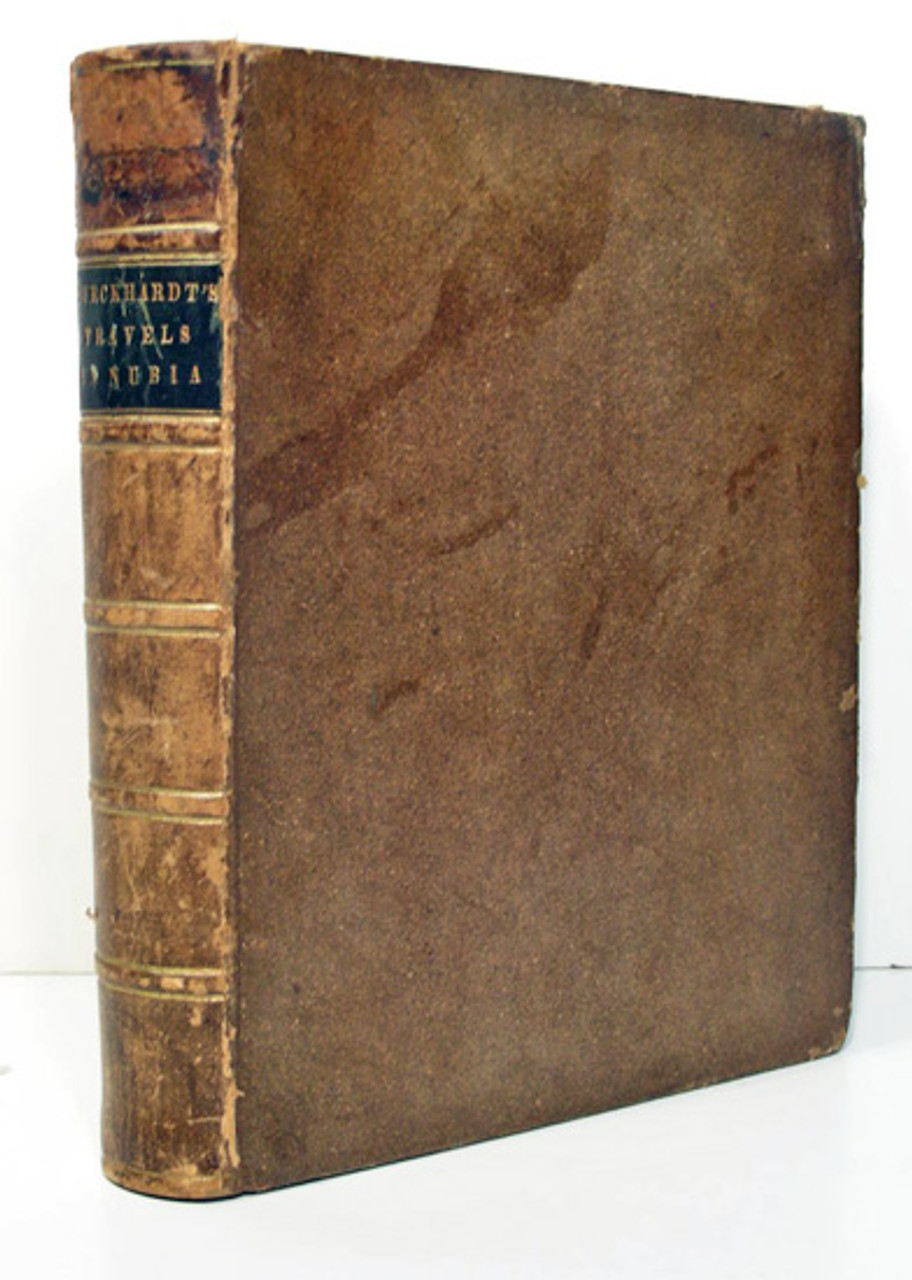 Burckhardt, John Lewis; Travels in Nubia; by the late John Lewis Burckhardt. Published by the Association for Promoting the Discovery of the Interior Parts of Africa. 2nd ed., London. John Murray. 1822.Quarto, pp. xcviii.498, frontis portrait of the author and 3 engraved maps (2 folding).

The volume is complete and in a contemporary speckled calf with black / gold spine label. Minor rubbing to boards, book plate of German Society on paste down and their rubber stamp on title page, smudge mark to last leaf, very good+.

A Swiss traveler and explorer, Burckhardt (1784-1817) was born at Lausanne, and educated at Leipzig and Gottingen before going to England with a letter of introduction from the naturalist Blumenbach to Joseph Banks who was, at this time, a member of the African Association. Banks welcomed his offer to explore the interior of Africa, and in 1809 he embarked for Allepo, N.E. Syria. In order to obtain a better knowledge of the region and local customs he disguised himself, and took the name of Sheikh Ibrahim Ibn. Abdallah. After two years passed in the Levant he had thoroughly mastered Arabic, and had acquired such accurate knowledge of the Koran, and of the commentaries upon its religion and laws, that after a critical examination the most learned Muslim had no doubt of his being really what he professed to be, a learned doctor of their law. During his residence in Syria he visited Palinyra, Damascus, Lebanon and thence journeyed via Petra to Cairo with the intention of joining a caravan to Fezzan, and of exploring from there the sources of the Niger. Three things prevented this plan from coming to fruition: the various Wahhaby uprisings, discouraging movement further into the interior; Burckhardt's continual ill-health throughout his stay on the continent; and his own disinclination to leave an area he found absolutely fascinating. His travels included Palmyra, Damascus, Lebanon; a journey up the Nile as far as Darmahass; a Journey across the Nubian Desert to Suakin on the Red Sea; and finally and spectacularly, Mecca and Medina where he became the first recorded European to mingle with the faithful in those Holy Cities. He made two journeys along the Upper Nile and through Nubia during the period 1812-17. His most important discovery in Nubia was the large temple at Abu Simbel on March 22, 1813. "Having, as I supposed, seen all the antiquities of Ebsambel. when having luckily turned more to the southward, I fell in with what is yet visible of four immense colossal statues cut out of the rock. They stand in a deep recess excavated in the mountain; but it is greatly to be regretted, that they are almost entirely buried beneath the sands. I suspect, could the sand be cleared away, a vast temple would be discovered". His suspicions were proved correct when Belzoni cleared and entered this temple four years later. His book is fascinating as a geographical tour, and as a compendium of customs, rituals, anecdotes, colours, purchases, conversations, dialects, markets, skirmishes, bandits, eunuchs, monuments and deserts. Such was his grasp of the language that he translated Robinson Crusoe into Arabic. In April 1817, when his final long-expected caravan prepared to depart, he became critically ill and died on the 15th of October. He was buried in a Mohammedan cemetery under his assumed name, Ibrahim ibn abdullah. Burckhardt had from time to time carefully sent to England his journals and notes, and a large series of letters, so that no important observations made by him in his travels be lost. He bequeathed his collection of 8oo vols. of oriental literature to the library of Cambridge University.