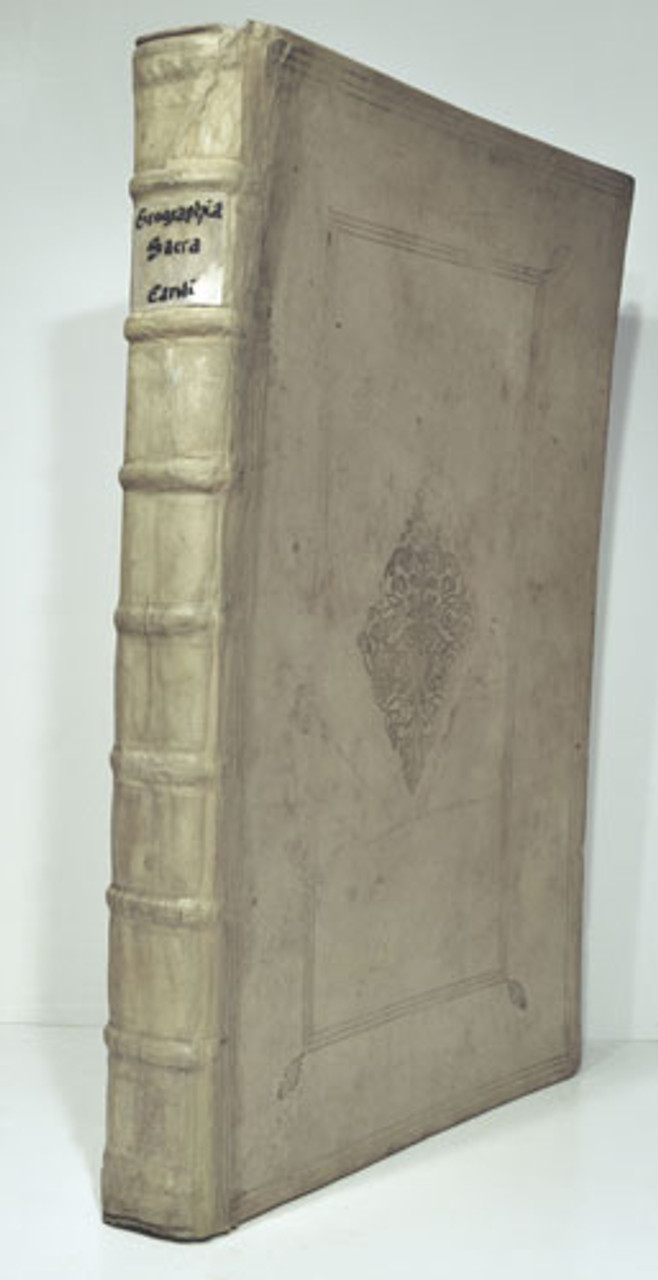 The work is complete and in a contemporary stamped and ruled vellum. The binding is tight, boards are bowed, spine with raised bands has been expertly repaired with a modern penned spine title in black. Early penned notes in Latin on two end sheets. Text is clean with light toning to some margins, nine of the ten maps are exceptionally clean with one map being toned. Over all a very good complete copy of a rare atlas.

Vialart De Saint-Pau was the Bishop of the Roman Catholic Diocese of Avranches in France from l1640 until his death in 1644. Vialert's history of Christianity folio text with maps was first published in Paris in 1641, and the contributions by Lucas Holstenius (1596-1661) and by Cardinal Barberini were added to the work. Holstenius studied in Leyden before travelling through Italy with Cluverius (1580-1622). He became librarian in Rome for Cardinal Barberini, and was Keeper of the Vatican Library from 1627. It was during their time together that the additional contibutions to Vialart's work were penned in anticipation of being added to Geographia Sacra. Geographia Sacra was published by Francois Halma who in 1695 also published  Ptolemy's "Tabulae gegraphicae orbis terrarium" and the re-issue of Schontanus a Sterringa's "Friesche Atlas"  in 1698, and an edition of Sanson's "Description de l'Universe" in 1709. The double page maps are of England, Turkey, France, Greece, Italy, Europe, Spain, Arabia, North Africa and Palestine, with designations for the Holy Sees. Lucas Holsten was a geographer and theological writer, but his contribution to Geographia Sacra was not in Vialart's original publication in 1641. The contribution was included with this 1703 edition where it first appeared together with the maps.