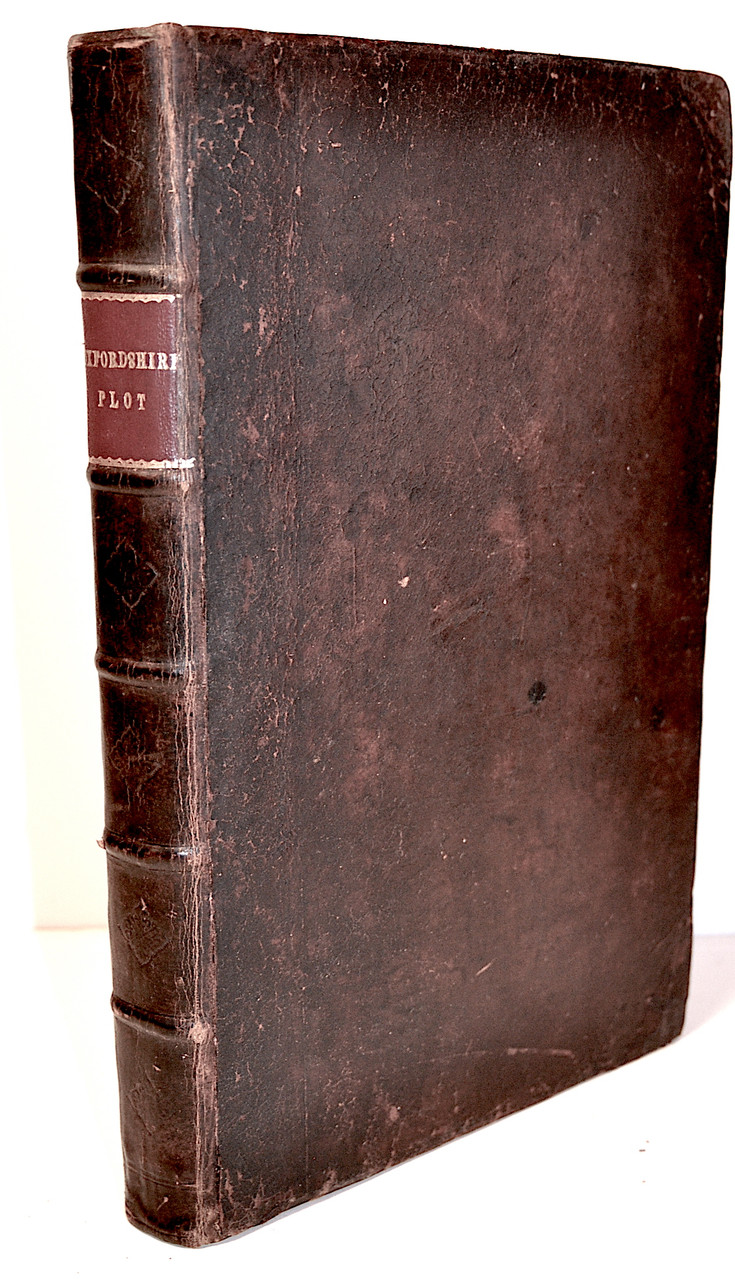 Plot, Robert; The Natural History Of Oxford-Shire, Being an Essay toward the Natural History Of England.  By R.P. LL.D. Printed at the Theater in Oxford, and are to be had there: and in London at Mr. S. Millers, at the Star near the West-end of St. Pauls Church-yard. 1677. 1st edition. Small folio, pp. 12, 358, 12, large folding map, 16 engraved plates with each plate having a dedication within an elaborate cartouche addressed to the owner of the land where the illustrated specimens were found.

The work is complete and in the original binder’s calf with gilt spine titles and raised spine bands. The binding is tight, scuffing to boards. Two old ink spots on title page, bleeding through to next page. Toning to outer margin of end sheets, plates and text with light edge wear. Early  penned signature dated 1813 of the famous English antiquarian, fossil collector and Fellow of the Geological Society of London, George Weare Braikenridge (1775-1856) on paste down with penned notes on Brailenridge on adjacent end sheet. Remaining text is very clean, map and plates very clean. In very good condition.

Robert Plot (1640-1696) was born into a wealthy family in Sutton-Barne, England. He was educated at Wye Free School and at Magdalen Hall, Oxford, where he earned his BA, MA and finally his BCL and DCL in 1671. During his studies Plot had directed his attention to the systematic study of the natural sciences; especially geology, minerals and fossils, and also the antiquities of England. He soon began his plan to complete a survey of every county in England, beginning with Oxfordshire which was where he lived. Plot ultimately completed only two county surveys.
In 1683, he was appointed the custodian of the Ashmolean Museum and professor of chemistry at the University of Oxford. Plot was secretary of the Royal Society from 1682 to 1684 and again in 1692.
Plot’s Natural History of Oxfordshire is his classic Baconian style natural history survey of an English county.
The book contains a large folded map, compiled and drawn by Plot himself during his years of travels through the shire. Plot’s map was the most detailed map of any county of England ever drawn to that time.
Plot discussed minerals and fossils first, then plants, then animals, but he devoted much more space to fossils and minerals than to flora and fauna.  Robert Hooke thought that fossils were the remains of formerly living organisms, but Plot thought that they were figured stones of inorganic origin. The specimens include some seventy species of fossils from what we now know are Jurassic and Cretaceous strata including the first known illustration of a dinosaur bone. It is illustrated on Plate 8, Figure 4. Plot originally thought the bone was the thigh bone of a giant, then after seeing an elephant he changed his opinion and thought it was the femur of an elephant taken to Britain in Roman times. The fossil bone would later be identified (from the illustration since the bone was destroyed through neglect) as the lower end of the femur of a theropod dinosaur, probably that of a Megalosaurus, making it the first theropod dinosaur bone ever illustrated. The Megalosaurus had to be rediscovered and described by William Buckland in the early 19th century.
Plot received immediate praise for his work and his collection of specimens from Oxfordshire. Elias Ashmole persuaded the University of Oxford authorities to accept Plot’s Oxfordshire collection and to provide a fine building in which to house it. The new museum, consisted of the museum display on the upper floor, a School of Natural History at ground level, and a chemical laboratory in the basement. In March of 1683 Plot was appointed both Professor of Chemistry, and first Keeper of the Ashmolean Museum.
Plot held these two positions for 7 years and then retired. It was his intention to write many more country histories but became quite ill. Plot suffered from kidney stones, and died on Apr. 30, 1696, at age 55.

Short, Thomas; The Natural Experimental, and Medicinal History of the Mineral Waters of Derbyshire, Lincolnshire, and Yorkshire, 1734-1740.