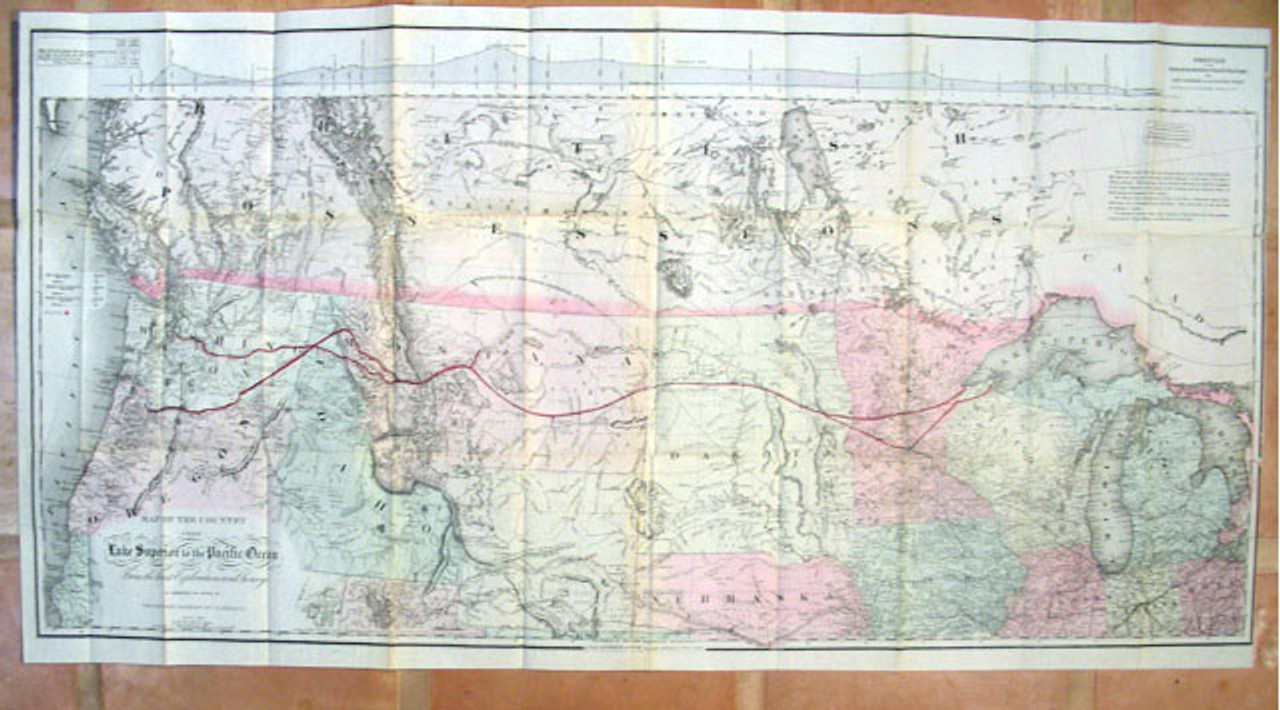 Colton, G.W., Colton, C.B. and  JOHNSON, Edwin F.; Map of the Country from Lake Superior to the Pacific Ocean from the Latest Explorations and Surveys. To Accompany the Report of the New York Chamber of Commerce. April 1868. at top right above map proper, table of elevations commencing L. Superior to Seattle... along top above map proper, profile of route with title to right Profile of the Route of the Northern Pacific Railroad, from Lake Superior to the Pacific Ocean... The distance from New City to Puget Sound... at far left margin at center, tables of distances, commencing] Sitka to San Francisco..., below map and into neat line Prepared at Coltons Geographical Establishment. G.W. & C.B. Colton & Co. 172 William Street New York. New York, 1868. Folded lithograph map, original full color and shading, original hand coloring (route outlined in bright red. Measures 45 inches wide by 23 inches high.

The map is bright and very clean, folded as issued, and in an archival sleeve. Very minor archival repairs at splits along two short folds. Over all in very good condition.

This map was issued in three formats between late 1867 and 1868, one of which was in an 1868 report published by the New York Chamber of Commerce. Produced by noted map makers,  the map is derived from their over-all railroad map of the West. An explanation is provided by Eugene V. Smalley, who in his History of the Northern Pacific Railroad (New York, 1883), says that the ideas of Asa Whitney “were taken up in 1852 by one of the ablest of the world’s great engineers, Edwin F. Johnson, and given practical form and value by the aid of his genius and technical skill.” Smalley holds that the Northern Pacific, the first projected and the last completed of the three great transcontinental lines, evidences the wisdom of Thomas Jefferson in causing the route it follows to be explored as the best natural highway for commerce from ocean to ocean, and...the foresight of Whitney and the engineering skill of Johnson in claiming in advance of its actual survey that it offered the best line for railroad construction and traffic. Smalley tells of Johnson’s promotion of a northern route in 1853, even before the Stevens explorations, and his being named chief engineer for the Northern Pacific Railroad in May, 1867. Johnson was ordered, “to commence surveys and locate a line between Lake Superior and the Red River of the North; also to explore the western end of Lake Superior, with a view to the location of the Eastern terminus of the road. He was further instructed to locate the line from Portland toward Lake Pend d’Oreille, to make a reconnaissance of the country between the water connected with the Straits of Juan de Fuca and the Columbia River, and thence eastwardly towards the eastern base of the Rocky Mountains, to make a measurement of the practicable passes in the Cascade Range, and to report the results of such surveys before the 15th of November.” Using the Colton map as a base Johnson showed his board of directors two lines starting from different points on Lake Superior and meeting near Fort Ransom on the “Shayenne River.” The route then curved northwest to cross the Missouri near Ft. Clark and went on to the Yellowstone and up the north bank of that river some distance, then strikes more northwesterly across the upper course of the Musselshell to reach the Missouri above Great Falls. From this point the route went on to cross the Rockies at Cadottes Pass, descend the Big Blackfoot a few miles, cross over to the Jocko and the Flathead, and after descending Clarks Fork nearly to the Lake Pend Oreille, make almost directly southwest to the Columbia at the mouth of the Yakima. Here the road branched, one line descending the north bank of the Columbia to Ft. Vancouver and Portland, the other going northwest up the Yakima and over Snoqualmie Pass to Seattle. As might be expected, there were material variances between Johnson’s projected line and the route over which the Northern Pacific was eventually built. To the map he added dotted lines respectively labeled “Isothermal Line of Mean Annual Temperature of 50º Fahr.” and “Isothermal Line of Mean Summer Temperature of 65º Fahr.” These isothermal lines were carried from the Great Lakes only as far as the summit of the Rockies.
The country portrayed extends from the west end of Lake Erie to the Pacific and from a little below the 42nd parallel to well above the 52nd parallel in the British Possessions. Dakota (including the unnamed Wyoming), Montana, and Washington are shown as is all but the southwest corner of Idaho, most of Oregon, and parts of Utah and Nebraska. A wealth of military detail is found on this map. In Dakota we see Ft. Sully and New Ft. Sully below and above old Ft. Pierre, with Ft. Rice beyond the Cannon Ball R. to the north. Farther west is the significant chain of military posts, Forts Reno, Phil Kearney, and C. F. Smith. In Montana we see familiar trading posts, Braseaus House and Ft. Sarpy on the Yellowstone, and Forts Charles, Galpin, Cook, Benton, and Labarge along the Missouri, with Ft. Union and Ft. William (the latter marked “Ruins”) just east of the Territorial line at the mouth of the Yellowstone. Washington has its share of military posts, a new one called Camp Osoyoos being added to older establishments like Ft. Colville, Ft. Simcoe, Ft. Steilacoom, and Ft. Vancouver. In Oregon...Ft. Henrietta is added to previously noted posts like Camp Dalgren, Camp Marcy, Camp Gibbs and Camp Watson.
The detail in the map is profuse and accurate, including exploration routes (Frémont, Mullan, Stevens, Stansbury, Warren, et al), wagon roads, overland mail routes, existing and proposed rail lines, Pony Express routes, tribes, trading posts, military establishments, landforms, waterways, presidios, missions, etc. This sharply delineated map is a superb example from Colton’s cartographic establishment.
Colton's important map shows the British Possessions and the United States and Territories south to the 40th Parallel. Details include, state and territorials borders, the route of the Northern Pacific Railroad and branch lines, Pony Express Routes, Overland Stage routes, military posts, cities, towns villages, Indian possessions, topographic and geographic featues and a east-west topographic profile. The map is quite stunning with an enormous amount of historical detail.