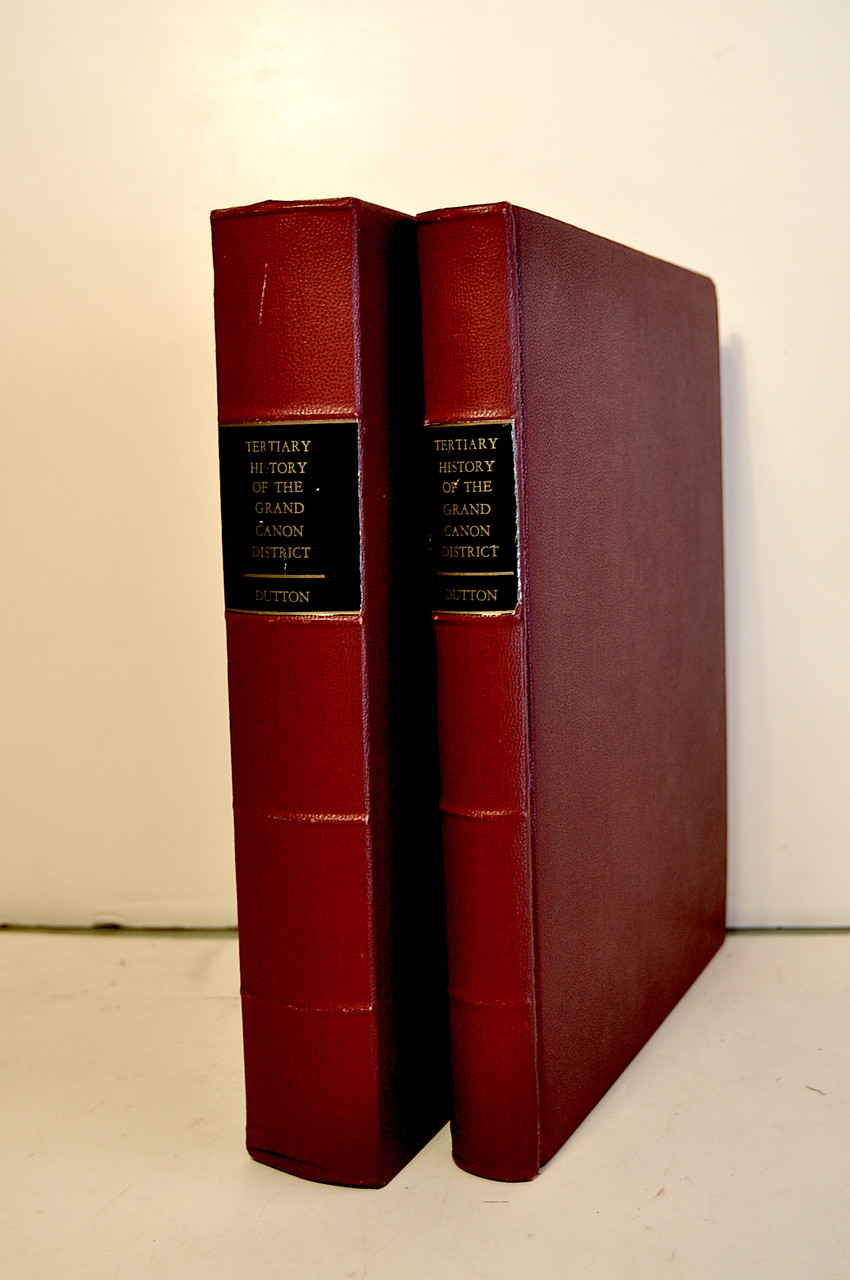 The text and atlas are complete and in a matching maroon colored leatherette with raised spine bands and black and gilt spine labels. The bindings are tight and clean, gilt titles bright, with very minor shelf scuffing to bindings. The text volume and plates are very clean. The atlas plates are folded as issued. The plates are clean and bright, free of blemishes and with only minor wear to folds. The panoramic views in the Kaibab division (plates 15-17) and Vulcans Throne panorama (plate 6) are beautiful. The Moran panorama amphitheater plate is very clean and free of blemishes. Overall the set is in exceptionally nice condition.

Clarence Dutton (1841 – 1912) was an American geologist and US Army officer. He was was born in Wallingford, Connecticut, graduated from Yale College in 1860 and took postgraduate courses there until 1862, when he enlisted in the 21st Connecticut Volunteers and fought at Fredericksburg, Suffolk, Nashville and Petersburg during the Civil War.
In 1875 he began his career with the U.S. Geological Survey and worked primarily in the Colorado Plateau region. He wrote several classic papers on the region including geological studies of the high plateaus of Utah (1879-80), and the Tertiary history of the Grand Canyon district. He then wrote a classic study on the Charleston, South Carolina earthquake of 1886. As head of the division of volcanic geology at the USGS, Dutton studied volcanism in Hawaii, California, and Oregon.
Dutton was known for his literary description, and is best remembered today for his descriptions of the geology and scenery of the Grand Canyon region of Arizona and his greatest accomplishment is his Tertiary History of the Grand Canon District. It is still considered the preeminent work on the Grand Canyon. The atlas is beautifully illustrated with maps and views engraved by Julius Bien. Sheet XVIII of the atlas, entitled "The Transept, Kaibab Division, Grand Canyon" is based on the beautiful painting of the same title by the artist Thomas Moran (1837-1926).
The field artist for Dutton's geological study of the Grand Canyon was William Henry Holmes (1846-1933). Holmes was most noted for his sense of realism and attention to detail. The views include a number of images that are designed to form larger continuous panoramas. His three greatest works in the atlas contain a view from Point Sublime in the Kaibab: the three double page sheets sheets (numbered XVI-XVII), if joined, would form a single panoramic view measuring approximately 17" high  by 90" wide. In addition to the USGS issue of the monograph and atlas, Congressional copies were also issued with the atlas plates folded. Apparently the folded issue was used in the field and became known as the “field edition”. If copies were used in the field then very few would have survived this use.

Calkins, F.C. and B. S. Butler; Geology and Ore Deposits of the Cottonwood-American Fork Area, Utah. 1943