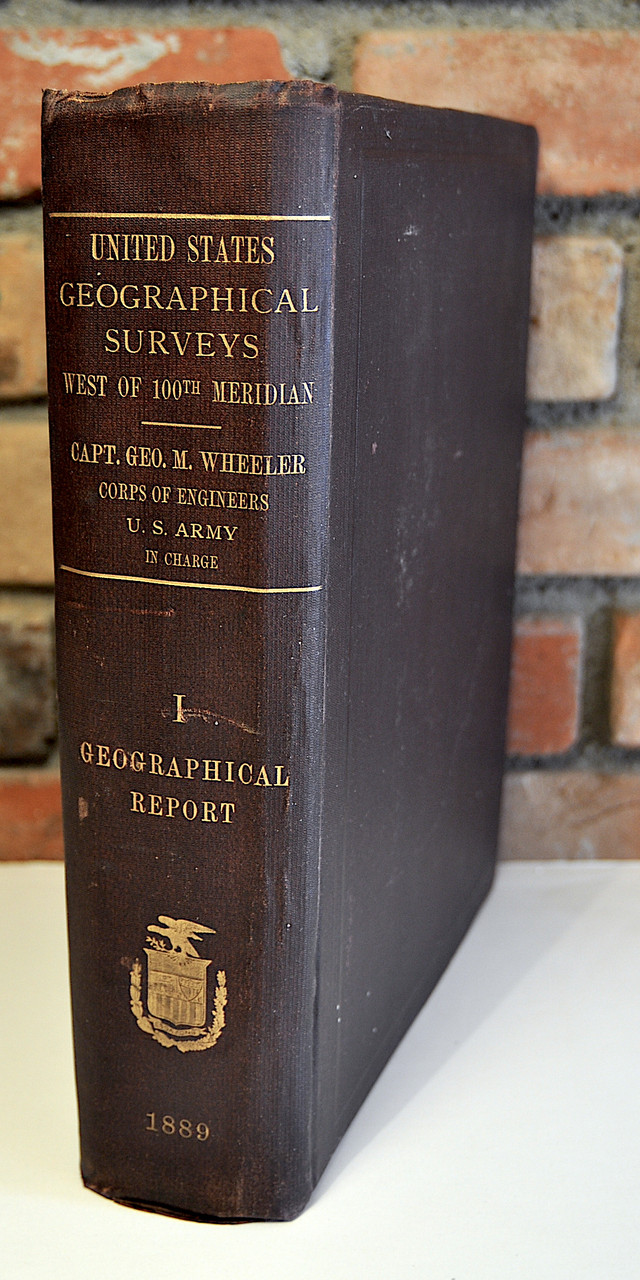 Product Description
Wheeler, George M.; Report of the United States Geographical Survey West of the One Hundredth Meridian…..Vol. 1 Geographical Report. Washington; Government Printing Office. 1889. Large quarto, pp. 780, 38 plates, and three folded maps, tipped in errata at title page.
The work is complete and in the original dark brown cloth with gilt spine titles and gilt spine vignette. The binding is tight and exceptionally clean, text and all maps and plates are very clean. In very good condition with Wheeler’s presentation complimentary tab on front paste down.
Wheeler (1842-1905) was an American Army officer, pioneering explorer and cartographer. He graduated from West Point in 1866, sixth in his class and was commissioned as a Lieutenant in the US Army Corps of Engineers and performed surveys in California and Nevada. Following the  survey of California, Nevada, and Arizona, Wheeler developed a comprehensive plan to map regions west of the 100th meridian with the main objective being to obtain correct topographical knowledge of the country traversed. Officially designated the U.S. Geographical Surveys West of the 100th Meridian, the "Wheeler Survey" became one of four great federal surveys after the Civil War. While the other surveys had no military presence, army officers commanded Wheeler's parties and performed much of the astronomy required for detailed surveying. Civilian topographers performed most of the mapping for Wheeler, and civilian scientists did pioneering studies in geology, botany, paleontology, and archaeology. The plates are quite stunning.