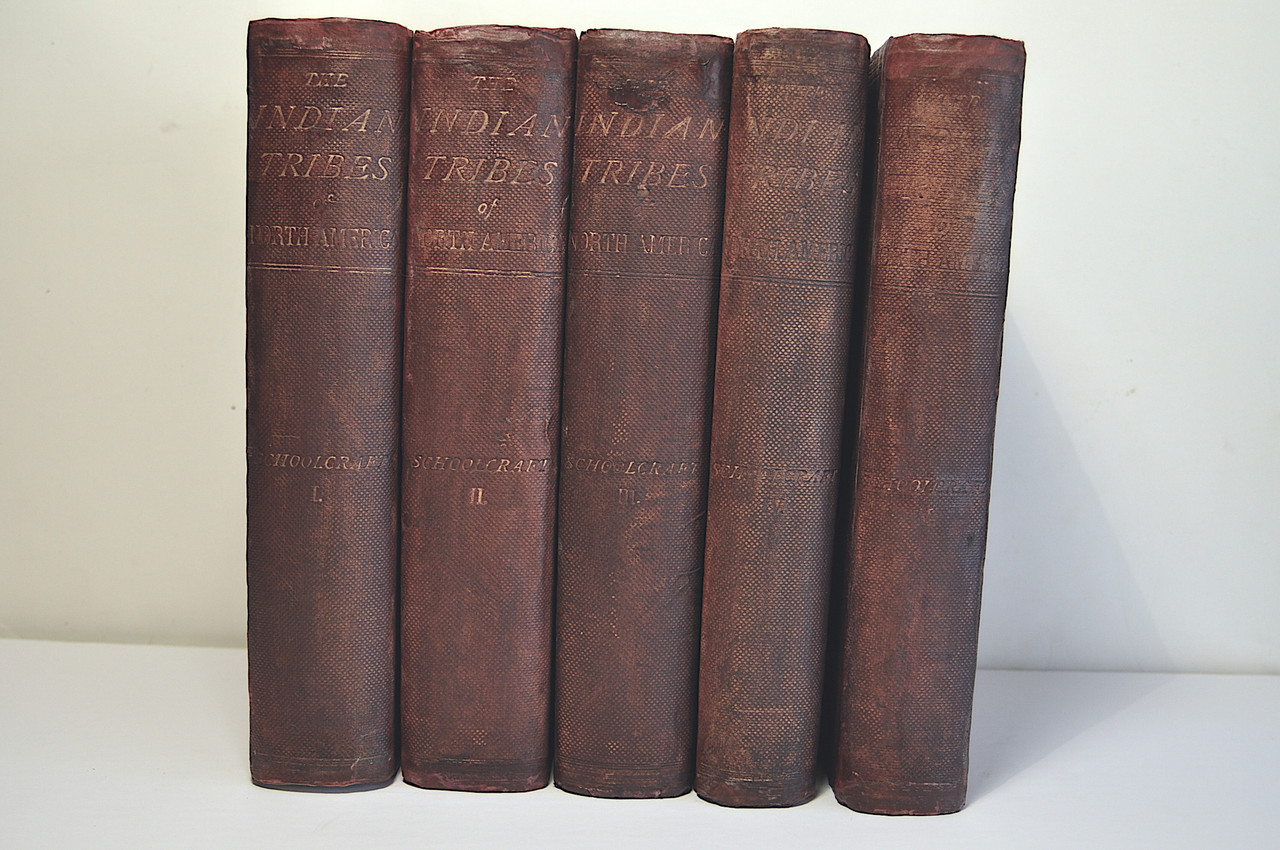 Product Description
Schoolcraft, Henry Rowe; Information, respecting the History, Condition and Prospects of the Indian Tribes of the United States: Collected and Prepared under the Direction of the Bureau of Indian Affairs, per Act of Congress of March 3d, 1847. 2nd edition. Philadelphia: Lippincott, Grambo & Company, 1853-1856. Quarto, five vols. Per bookseller note on paste down,Vol 6 was not issued at the time of publication. However, that vol. was issued at a later date and thus is not present in this set. The half-titles and engraved additional titles are present.
The set is in the original  pebbled cloth with ruled borders, gilt cover vignette and gilt spine titles. Tiles are faded, archival restoration to spine margins, inner hinges restored, book plate on front paste down. Additional notes on condition below.
part 1, text and plates clean with minor foxing. Early book dealer note on paste down, penciled notes on rear paste down. pp. xxii, 568, 76 plates,
part 2, text and plates very clean with only minor foxing, inner hinge repaired at page 310. pp. 608. 78 plates, (some colored), 2 tables.
part 3, light foxing to text and plates. pp. 635, 45 plates
part 4, light foxing to text and plates. pp. 668, 41 plates
part 5, toning to rear appendix on language due to poor quality of paper. remaining text and the plates are bright with only minor spotting. pp. 712, 34, plates, 9 wood-cuts. Map of Creek County and plate 9 comparison of north and south mounds not issued.
Schoolcraft, (1793-1864); was an American geographer, mineralogist and ethnologist. He was noted for his early studies of the mineral deposits of present day Missouri and Arkansas, and for discovering the source of the Mississippi. It was during these early explorations that he first came in contact with the indigenous peoples of the region. In 1820 Schoolcraft joined the first American expedition through the upper Great Lakes, headed by Lewis Cass, governor of Michigan Territory. In1821 he was secretary to a treaty council in Chicago for acquisition of Potawatomi and Ottawa land in southwestern Michigan. By 1822 he was employed by the federal Indian service, as the first Indian agent at Sault Ste. Marie, Michigan. This led to his studies of of the various Native American cultures and the publication of the comprehensive work on the subject. The plates of artefacts and antiquities are particularly interesting and important including weapons, costumes, domestic utensils, housing, religion, pictographs etc.