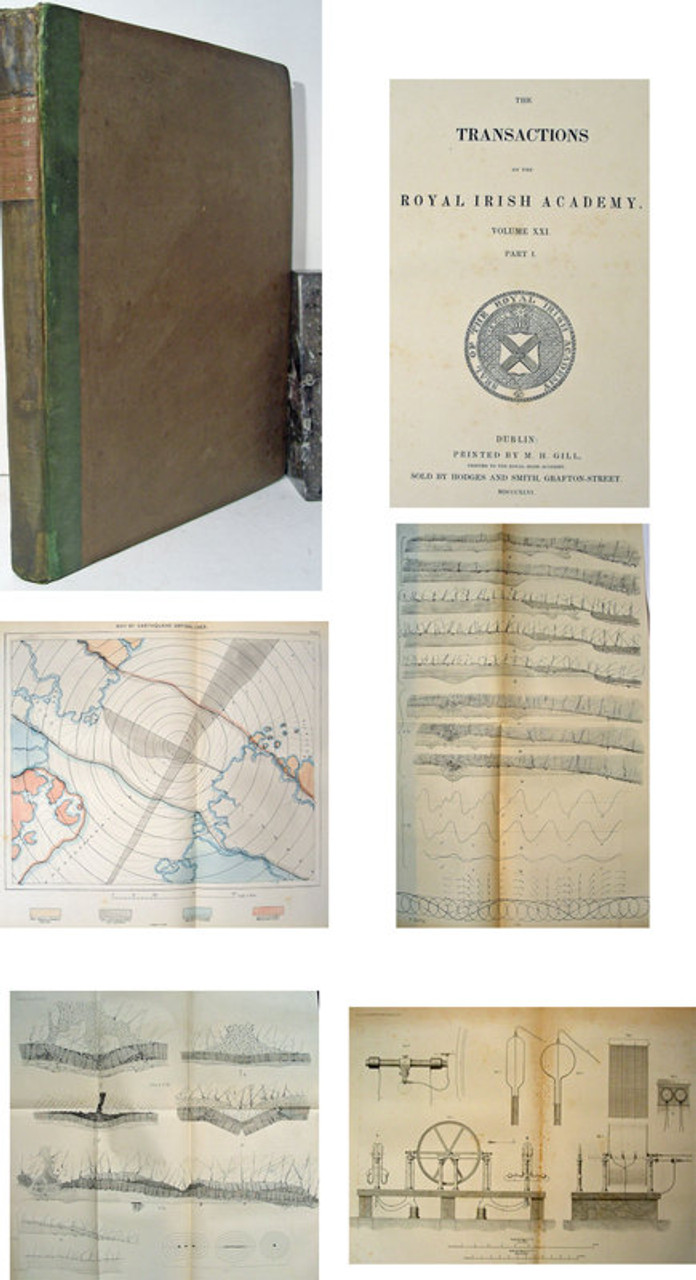 Mallet, Robert; On the Dynamics of Earthquakes; being an Attempt to reduce their observed Phenomena to the Known Laws of Wave Motion in Solids and Fluids. & On the Objects, Construction, and use of Certain New Instruments for Self Registration of the Passage of Earthquake Shocks. In Transactions of the Royal Irish Academy, volume 21, Dublin, 1846. Quarto, pp. 51-113, 4 folded maps and plates.

The above two works are in volume 21 of the Royal Irish Academy. The volume is complete and in the original paper covered boards with a cloth spine and modern gilt title label. Light wear to the binding, the hinges are tight. Stamp of the Dublin Castle library on the end sheet. The text has very minor foxing, is uncut and has never been read. Over all in very good condition.

Mallet (1810-18881); an Irish geologist and physicist, produced the first seismic map of the world which was published in 1858 in the British Association for the Advancement of Science Reports. The map was highly accurate in defining many of the plate margins as we know them today. Many of his principles and ideas concerning earthquakes were developed as the result of his study of the major 1857 Neapolitan quake; one of the largest ever recorded in Europe, and previous studies of earthquakes. On February 9 1846 he presented to the Royal Irish Academy his paper, "The Dynamics of Earthquakes which is considered to be a foundation work in the science of modern seismology. He is also credited with coining the word "seismology" and other related words e.g. the isoseismal map, which he used in his research. Mallet also first used the term epicenter. His studies involved carrying out blasting experiments to determine the speed of seismic propagation in sand and solid rock and he recorded the shock waves through various mediums on instruments which were the predecessors of modern seismographs. The two works offered above are quite scarce. The volume also contains MacCulloch's paper on refraction and reflexion in crystals, and Cooper's paper on observations of comets.