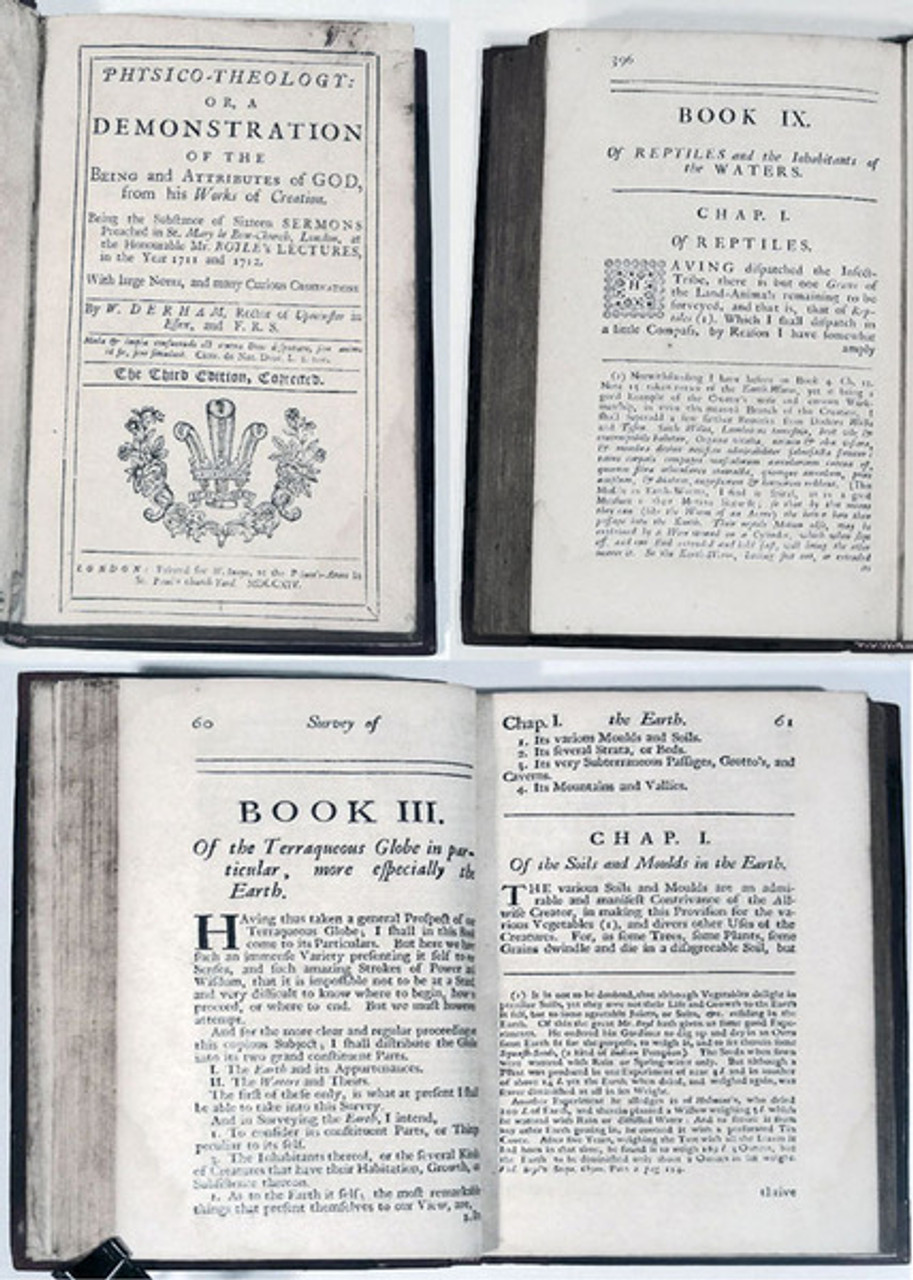 The book is complete and in the original paneled calf with a later calf spine with gilt titles and six spine panels. The binding is tight and clean, text is toned at margins of first and last leafs. In very good condition.

FREE SHIPPING ON ALL BOOKS.

William Derham FRS (1657 – 1735) was an English clergyman and natural philosopher. He was educated at Blockley, Gloucestershire and at Trinity College, Oxford from 1675 to 1679 and was ordained on 29 May 1681. Derham knew many of the leading scientists of his time, among them Isaac Newton and the astronomer Edmond Halley, and was himself elected to the Royal Society. In 1696, he published his “Artificial Clockmaker, Treatise of Watch and Clock-Work”, which included a short history of horology, and which went through several editions. In 1713 he published Physico-Theology which was corrected in second and third editions in 1714 and went through several later editions.
An example of Derham's practical scientific work can still be seen in the sundial, for which he did the calculations, attached to the Lincoln chapel of St George's Chapel in Windsor Castle. Derham first accurately calculated the speed of sound by observing the times at which gun-flashes from various points were heard and published his findings in the Philosophical Transactions of the Royal Society. In 1711 and 1712 Derham delivered the Boyle lectures at St Mary-le-Bow, London, in the spirit of Boyle's intention he intended to refute anti-Christian philosophies by using natural history to promote and prove a natural theology. He included his material from the Boyle lectures in subsequent published works. The first was Physico-Theology, published in 1713; Astro-Theology, 1714; and Christo-Theology, 1730. All of these books also include quantities of original scientific observations. For example, Physico-Theology contains his recognition of natural variation within species and one learns that Derham knew that Didelphis virginialis (the Virginia opossum) was the only known  marsupial in North America. Similarly, Astro-Theology includes several newly identified nebulae or what we would now call star clusters.