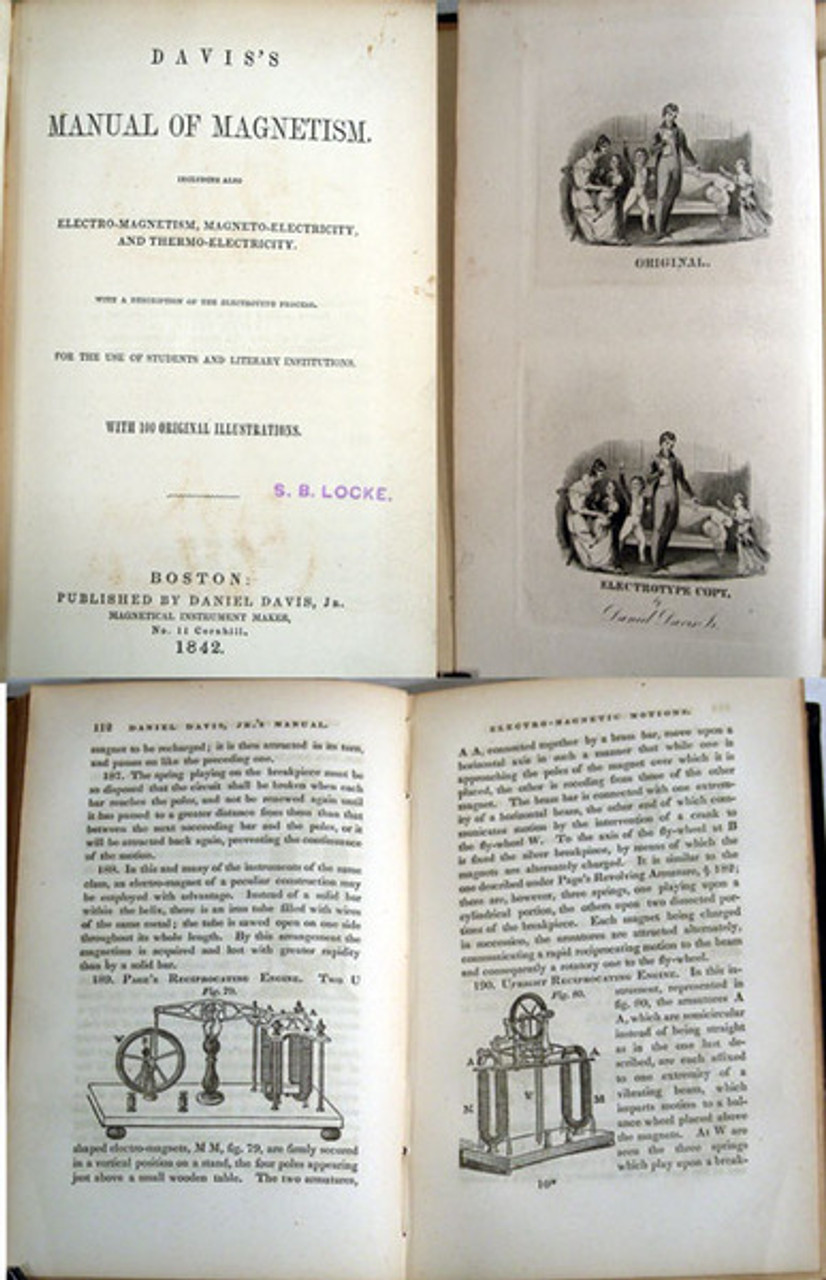 Bound in the original cloth with gilt titles. Binding is tight and has been nicely re-cased. The text is clean with owner’s stamp on end sheet, half title and title page. The text is very clean. In very good condition.

A native of Princeton, New Jersey, Davis (1813-1887) was self-educated. He moved to Boston in 1833. Having an interest in electrical experiments, he was employed at a shop which manufactured static electrical machines and also constructed and installed lightning rods. In 1835 he began business for himself at No. 11 Cornhill, in partnership with the late John Temple, under the firm name of Davis & Temple. In 1837 Mr. Davis bought out the interest of his partner and commenced the manufacture of electro-magnetic apparatus.  With little practical use for electricity his principal business was manufacturing and constructing apparatus to illustrate the general principles of voltaic and dynamic electricity. With the assistance of Dr. Charles G. Page Davis invented many of the electric circuits, movements and machines that were soon to be put to use by industry and municipalities. Since Davis had the only establishment in the United States at this time which made electro-magnetic apparatus his business increased very rapidly.
However Davis did not believe in patents. Had he patented some of his inventions he would have died a millionaire. He invented the art of electrotyping in copper, wood-cuts and type such as are used to-day, and gave his inventions to the world. In 1846 he electrotyped in copper the arm of a child, which has been lately claimed as a new invention. In 1840 Professor Gareaux of Paris arrived in Boston with the invention of Daguerre. Davis made a set of apparatus and probably took the first daguerrotype taken in this country. This first picture taken in Boston was the German Catholic church on Suffolk street, now Shawmut Avenue. ?Davis was also the first man in this country who did electro gold and silver plating, and taught the art. In 1844 Professor Morse had just introduced his telegraph, but it was a very rude and impracticable machine. He provided the crude machine to Davis for improvement and the result was the telegraph we remember. He received several gold medals from various exhibitions for his inventions and skill as a manufacturer. His shop became a gathering place for famous professors, scientists and electricians for many years. It was frequented by Dr. Hare, Professors Webster, Hitchcock, Silliman, Henry, Abbott, Farmer and Channing and most of the other scientific minds of the time. ?At that time probably no man in this country had such a thorough practical knowledge of electricity. He will long be remembered through his published work on magnetism entitled "A Manual of Magnetism”. The first edition came out in 1842 and was published more to advertise his instruments, and as a means of calling attention to his business. The accompanying catalogue contains a wealth of information on his many devices. The work was used as a textbook by many colleges and high schools, and became a required text at the United States Military Academy at West Point. Students made use of the many practical demonstrations shown within its pages. In 1852 Davis retired back to his farm in Princeton.