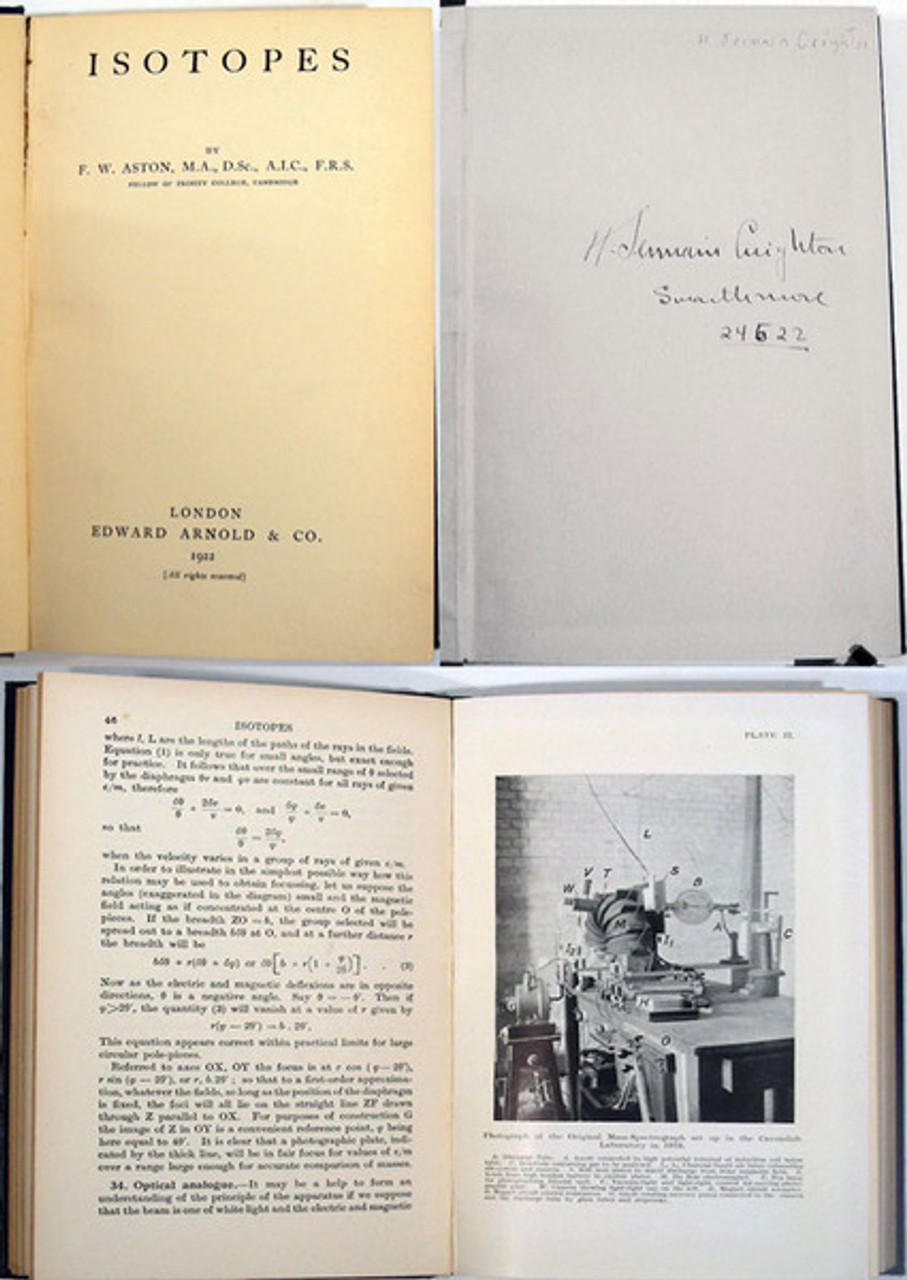 The work is complete and in the original blue cloth with gilt spine titles. The binding is tight with minor scuffing to the covers, the text is very clean with light toning. From the library of H. Jermain Creighton with his signature on paste down and again on end sheet. In very good condition.

An English physicist and Nobel Laureate, Francis William Aston (1877-1945) was educated at Harborne Vicarage School and Malvern College. In 1894 he entered Mason College, Birmingham (later to become the University of Birmingham) where he studied chemistry under Frankland and Tilden, and Physics under Poynting. His winning of the Forster Scholarship in 1898 enabled him to work on the optical properties of tartaric acid derivatives; the results of this work were published in 1901.?His interest in physics, rather than chemistry soon prevailed. In 1903 he obtained a scholarship to Birmingham University to work on the properties of the Crookes Dark Space in discharge tubes. Within a short time he had discovered the phenomenon which is known as the Aston Dark Space.?At the end of 1909 he accepted the invitation of Sir J. J. Thomson to work as his assistant at the Cavendish Laboratory, Cambridge, on studies of positive rays. It was during this period that he obtained definite evidence for the existence of two isotopes of the inert gas neon.?After research work for the defense industry during WW-I, Ashton returned to the Cavendish Laboratory in 1919, to further work on the separation of the isotopes of neon and subsequently invented the mass spectrograph and using this invention discovered over 212 of the naturally occurring isotopes.?From the results of this work he was able to formulate the Whole Number Rule which states that, the mass of the oxygen isotope being defined, all the other isotopes have masses that are very nearly whole numbers.
The results of his work were published in the Proceedings of the Royal Society and in the Philosophical Magazine. and gathered into the book “Isotopes” (1922; revised edition 1941).?His work led to numerous honors. Aston was elected to a Fellowship at Trinity College in 1920, and in that year he also received the Mackenzie Davidson Medal of the Röntgen Society. In 1921 he was made a Fellow of the Royal Society and was awarded the Society's Hughes Medal the following year. In 1922 he received his highest recognition. Nobel Prize. The John Scott and the Paterno medals were given to him in 1923, the Royal medal in 1938, and he was Duddell medalist of the Physical Society in 1941. Ashton died at Cambridge on November 20, 1945.?This copy of Ashton’s “Isotopes” was owned by the noted Canadian chemist, H. Jermain Creighton (1886-1963?). Creighton lectured on physical chemistry in Canada until 1912 when he accepted a teaching position at Swarthmore College, Pennsylvania. He became head of the Chemistry Department of Swarthmore in 1928 and retired in June 1952 after 40 years of teaching at Swarthmore. During his career he was considered one of the foremost teachers of electrochemistry. The Franklin Institute awarded him the Longstreth Medal, and he was elected President of the Society 1939. He received the Edward Goodrich Acheson Medal and Prize Award of the Society in 1946.