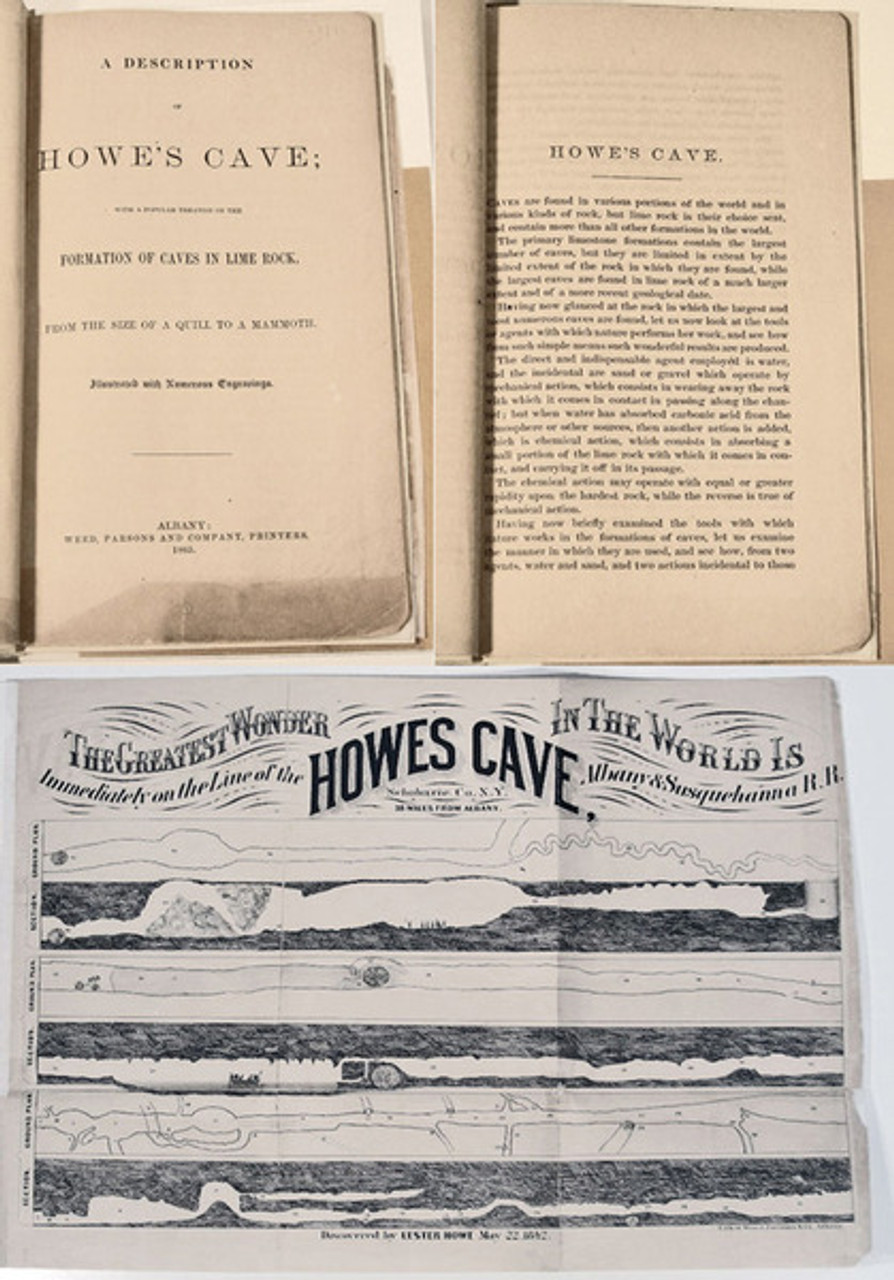 Howe’s Cave, New York; A Description of Howe’s Cave; With a Popular Treatise on the Formation of Caves in Lime Rock, from the Size of a Quill to a Mammoth. Illustrated with Numerous Engravings. Weed, Parsons and Company, Printers, Albany:: Weed, Parsons and Company, Printers,. 1865. Octavo, pp. 28, (50 notations to cave features on folded plate (15 inches x 12 inches)). The folded plate is titled “The Greatest Wonder in the World is Howe’s Cave, Immediately on the Line of the Albany & Susquehanna R. R.”. At bottom of plate is notation “Discovered by Lester Howe May 22, 1842”. The folded plate has six profiles, three being sections and three being ground plans.

Howe Caverns is located in Schoharie County, New York, 30 miles west of Albany and is named after farmer Lester Howe, who discovered the cave near his land on May 22, 1842. Noticing that his cows frequently gathered near some bushes at the bottom of a hill on hot summer days, Howe investigated and found a hole with a strong, cool breeze emanating from it. Howe proceeded to dig out and explore the cave with his neighbor, Henry Wetsel, on whose land the cave entrance was located.  ?Within weeks of Howe's discovery, there were newspaper reports about his discovery. Among the first stories was one that appeared in the New York Tribune in August 1842, with the author identified only by the initials E.G.S. After much work, Howe opened the cave to eight-hour public tours in 1843, and, as business grew, a hotel was built over the entrance.?When Howe encountered financial difficulties, he sold off parts of his property until a limestone quarry owner bought the remainder. The quarry's purchase included the hillside which opened to the cave's natural entrance. Once mining commenced, the cave was closed to the public until an organization was formed in 1927 to preserve and reopen it. The organization spent the next two years undertaking development work to create another route into the cave. After completion of the work – including elevators, brick walkways, lighting and handrails – the cave was reopened to visitors on Memorial Day 1929. ?The 1865 report “A Description on Howe’s Cave” is a promotional report which was probably issued by the owner’s of Howe’s Cave and the Albany-Susquehanna Railroad.