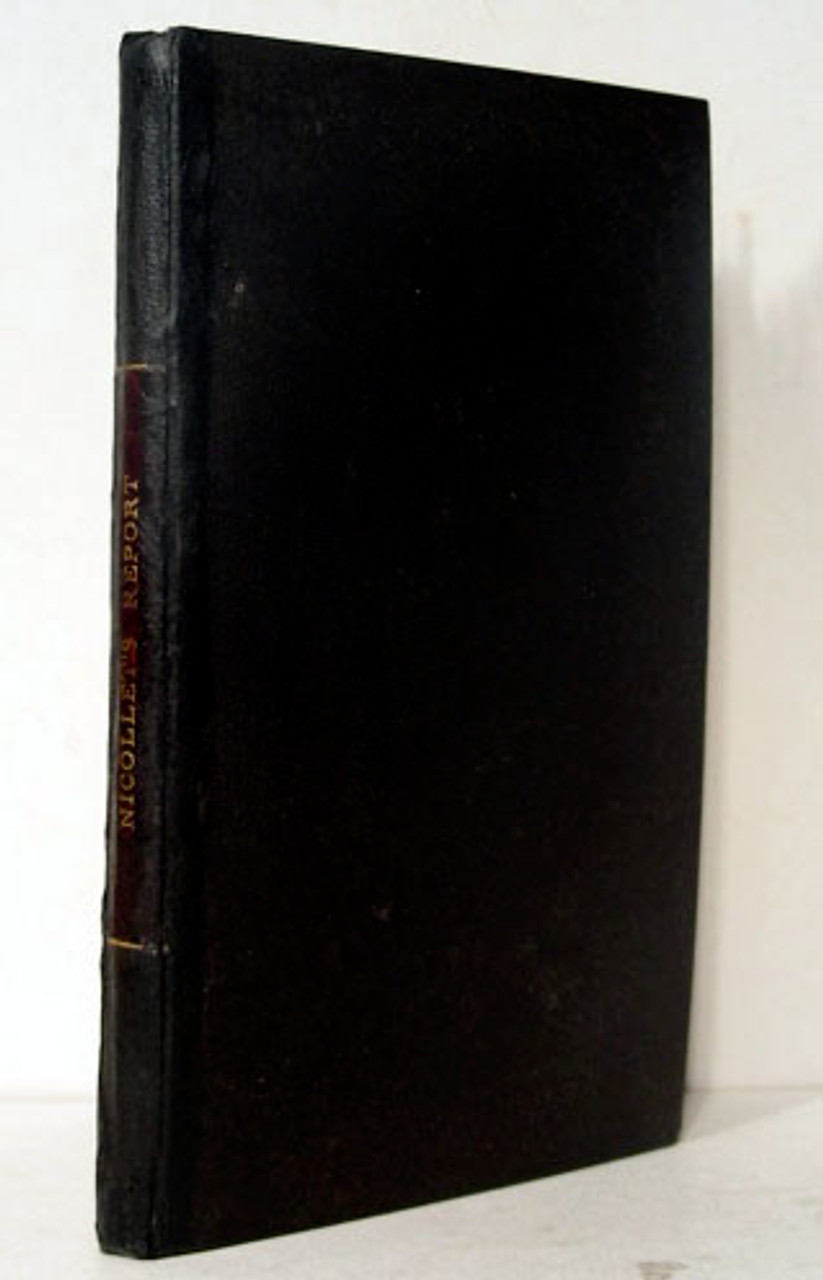 The book is complete and in the original cloth with a calf spine label. The binding is tight and clean, inner hinges nicely tightened, the text is very clean and the map is in near mint condition.

Joseph Nicolas Nicollet (July 24, 1786–September 11, 1843), also known as Jean-Nicolas Nicollet, was a French geographer and mathematician known for mapping the Upper Mississippi River basin during the 1830s.. Following financial difficulties in France, Nicollet emigrated to the United States in 1832. First living in New Orleans, Louisiana, he later moved up the Mississippi River to St. Louis, Missouri.
Nicollet led three expeditions exploring the Upper Mississippi, from the Lake Superior region to Minnesota and into parts of North and South Dakota as well. The first took place in 1836–37 and was largely funded by St. Louis's wealthy Choteau family. In it, Nicollet explored the Mississippi to its source of Lake Itasca and the nearby Mississippi tributary, the St. Croix River. Following acceptance of a position with the United States Army Corps of Topographical Engineers in 1838 Nicollet led a surveying mission from Fort Snelling to the Lake Superior region and then to the Pipestone region in southwestern Minnesota and southeastern South Dakota . Finally he led another mission in 1839 to further explore the region between the Mississippi River and the Missouri River. In these latter expeditions, he had assistance from John C. Frémont and the Jesuit Missionary Pierre-Jean De Smet. De Smet used skills learned from Nicollet to make his own maps of the Missouri River basin.
After the expeditions, Nicollet left the Minnesota area to go to Washington, D.C. He worked on consolidating the information collected during the expeditions and fully intended to return to the area, but failing health led to his death in Washington in 1843. Later that year, this book, was published. The map in the book was highly accurate and covered a region more than half the size of Europe. It was the first accurate map of the region. The map shows all of the various Indian lands, the US lands which were not states yet, the rivers, lakes, towns topographic features etc. It is a stunning map.
Today, Nicollet's name is applied to many places in the region he explored, including Nicollet Island (next to Saint Anthony Falls, the only waterfall on the Mississippi River), Nicollet Avenue in Minneapolis, and Nicollet County in southern Minnesota and the Chequamegon-Nicolet National Forest and Nicolet Wilderness Area in northern Wisconsin.
The map is considered one of the most important American maps of the 19th century. It is the earliest accurate map of the interior of North America covering a region from St. Louis north through the Lake Superior region to the Canadian border and west along the Missouri River which encompasses the Northern Plains region.
He discusses the physical geography of the entire region, the geology and minerals found, the mineral deposits observed, the various tribes observed, the methodology of surveying with examples from the lake Superior region, descriptions of Fort Charlotte and region to Grand Portage of Lake Superior, Fort William northwest coast of Lake Superior. Appendix A is a series of tables of geographic names and locations. Appendix B is a listing of plants. Appendix c is a list of fossils and localities.