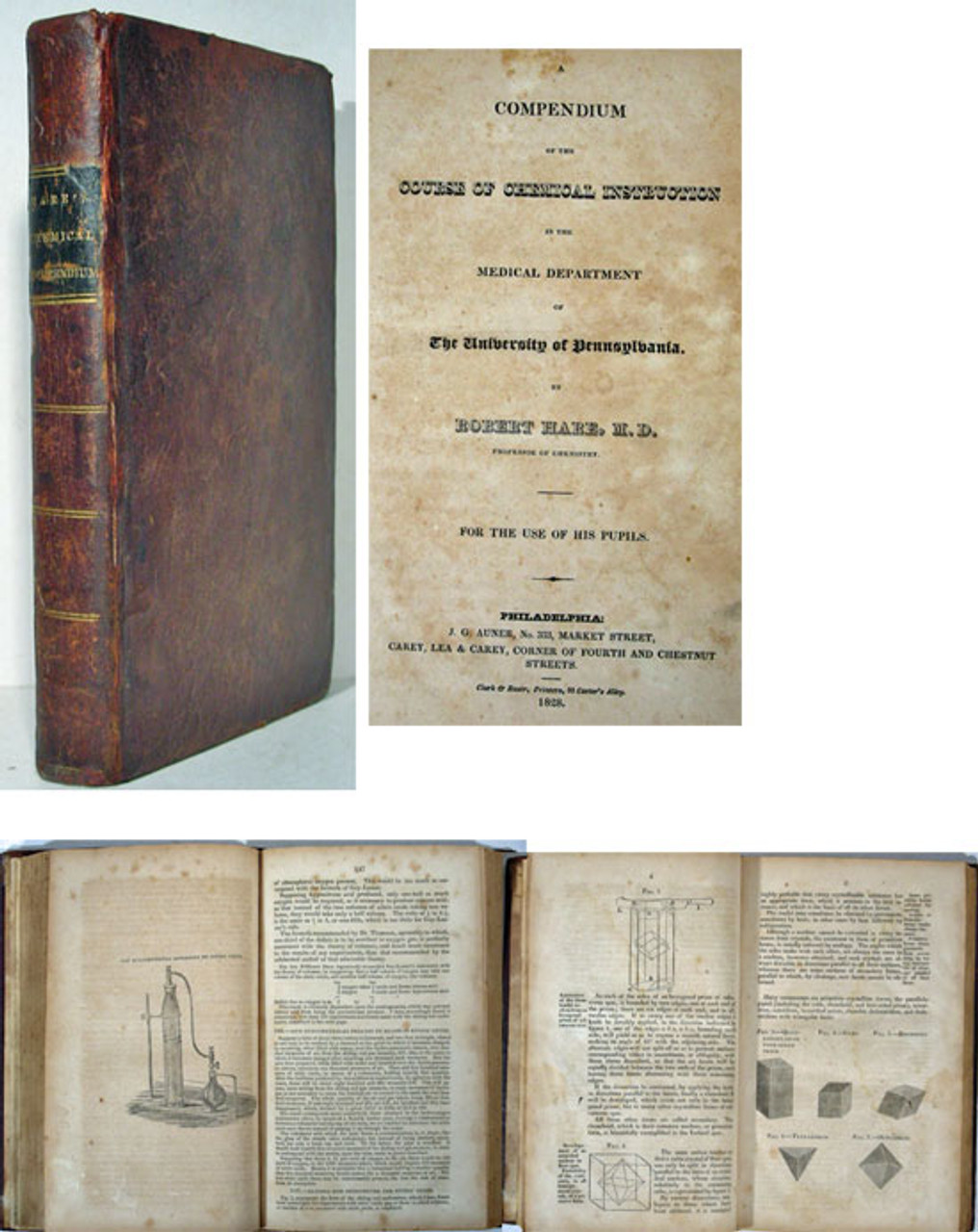 The work is complete and in the original full calf with gilt spine titles. The binding is tight with scuffing to the boards, Auner's original bookseller plate on front paste down. The text has light to moderate toning and a water stain to the outer margin of the first and last pages with stain being more severe in the last pages of the appendix. Lower outer corner of page 121 torn away with lose of some text words in last few lines. This book was obviously put to use by a student. In good condition.

Robert Hare (1781-1858) was born in Philadelphia and resided in that city for most of his life. He was one of his era's most respected scientists.
As a young man, Hare attended the Academy of the University of Pennsylvania, the highest level of formal education he would receive. While at that institution, Hare developed a passion for chemistry while attending the lectures of James Woodhouse. He was the first chemist to distill iridium, lime, magnesia, and platinum in fusible quantities, and devised a process to de-narcotize laudanum and a test to detect tiny quantities of opium.
His inventions include the galvanic deflagrator, an early electric device that provided intense and immediate combustion; the aqueous sliding rod hydro-oxygen eudiometer, which accurately measured oxygen content in the atmosphere; and the hydrostatic blow-pipe or oxyhydrogen blowtorch, which mixed hydrogen and oxygen in a flame-thrower. This was the greatest heat source science had up to that time, and it allowed the mass production of platinum, and of lime for lighting.
The small pamphlet that Hare wrote to describe his invention of the hydrostatic blow-pipe, "Memoir on the Supply and Application of the Blow-Pipe" (Philadelphia: Chemical Society, 1802), brought him international fame when it was republished in the prestigious English Philosophical Magazine and the French Annales de Chimie. The elder Silliman, who was engaged with him in a series of experiments with this instrument in 1802-3, subsequently described it as the compound blow-pipe. His device was also the ancestor of the modern welding torches. Based on this single invention, Hare was elected to the American Philosophical Society in 1803 and was awarded an honorary medical degree by Yale in 1806, and frown Harvard in 1816. In 1839 Hare became the first recipient of the American Academy of Arts and Sciences' Rumford Prize.
In 1818, William and Mary College offered Hare a position as Professor of Natural Philosophy and later that same year, the Medical School at University of Pennsylvania appointed him as Professor of Chemistry. He left William and Mary and returned to Philadelphia and remained at the University for almost thirty years until 1847. At Penn, Hare was at his best with advanced students and used many of his dramatic demonstrations of chemical principles, often employing apparatus he had developed himself. It was at Penn that he wrote his "Compendium of the Course of Chemical Instruction" with the 1st edition in 1828. The text went through four editions before 1840, and is considered one of the most thorough chemical textbooks in America during that era.