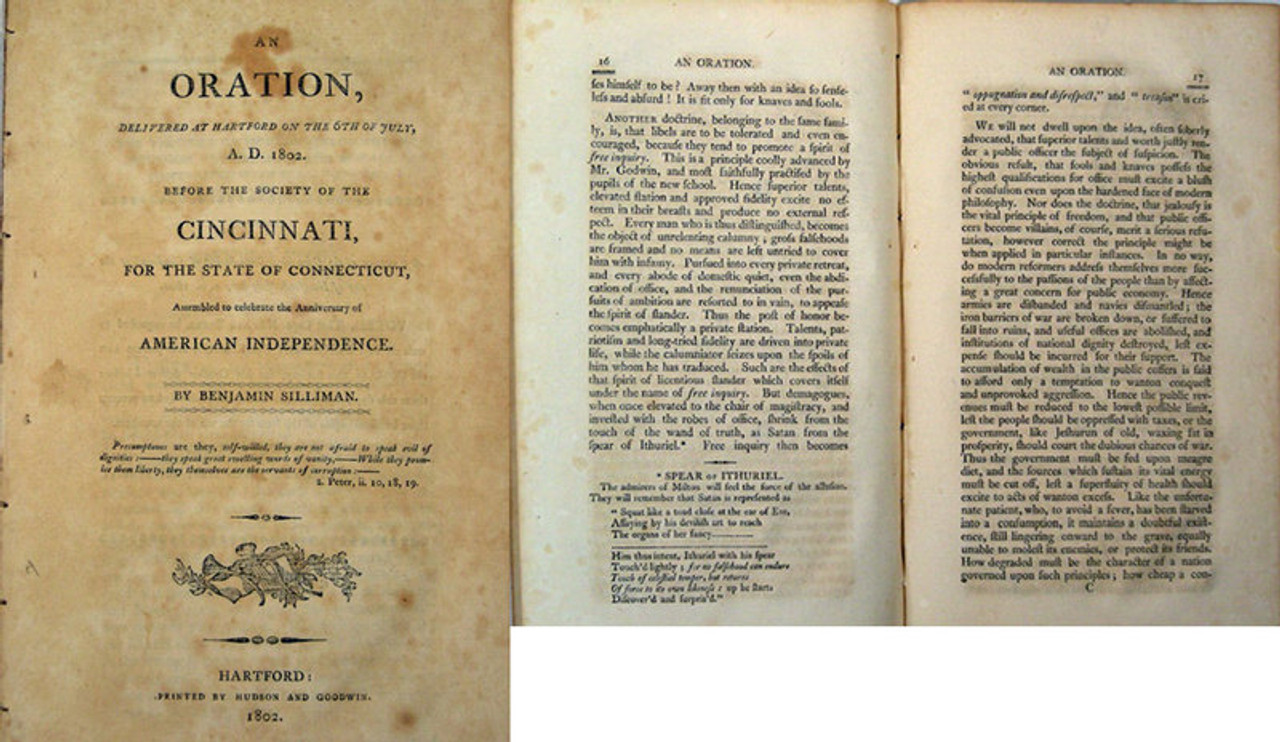 Silliman, Benjamin; An Oration, Delivered at Hartford on the 6th of July, | A. D. 1802. Before the Society of the Cincinnati for the State of Connecticut, Assembled to Celebrate the Anniversary of American Independence. Hartford, 1 of only 300 copies printed by Hudson and Goodwin, 1802. Octavo, pp. 34.

The pamphlet is in a modern archival wrap with typed titles on cover. The wrap is pristine, light foxing to first and last pages of pamphlet. A very good copy of a very rare Silliman speech.

Benjamin Silliman (1779-1864) was an American geologist, chemist and mineralogist, orator, and poet. He was a staunch supporter of the Early Republic, founded the American Journal of Science and was First Professor of chemistry and mineralogy at Yale University. Silliman was one of the founders of the American scientific community and is considered the most influential scientist in America during this time. He was born in what is now Trumbull, CT, and raised in nearby Fairfield, entered Yale in 1792 at the age of 13, graduating in 1796. In 1798 he returned to Yale to begin studying law and to tutor and was admited to the bar  in 1802. That same year, with no background for the position, Silliman was appointed to the newly established professorship of chemistry and natural history at Yale, with permission to qualify himself for the job before beginning his duties. His preparation included attending lectures at the Philadelphia Medical School; work with the chemist Robert Hare; occasional visits to John Maclean, professor of chemistry at Princeton; and 2 years at Edinburgh, Scotland. In 1808 he assumed full professorial duties at Yale, lecturing in chemistry, geology, and mineralogy. In his early years Silliman became involved in the New England religeous revival movement. In 1802this led to his earliest printed work which was his speech condemning the "modern philosophy movement" which he preceived as a threat to American morals. Within the speech he condemns equal rights for women, permissive behavior, the questioning of religieous beliefs and he believed that this would lead to such things as the exceptance of suicide. He supported the use of institutions of science, government and religion as pillars upon which society should turn for "safety" from the modern philosophy movement.