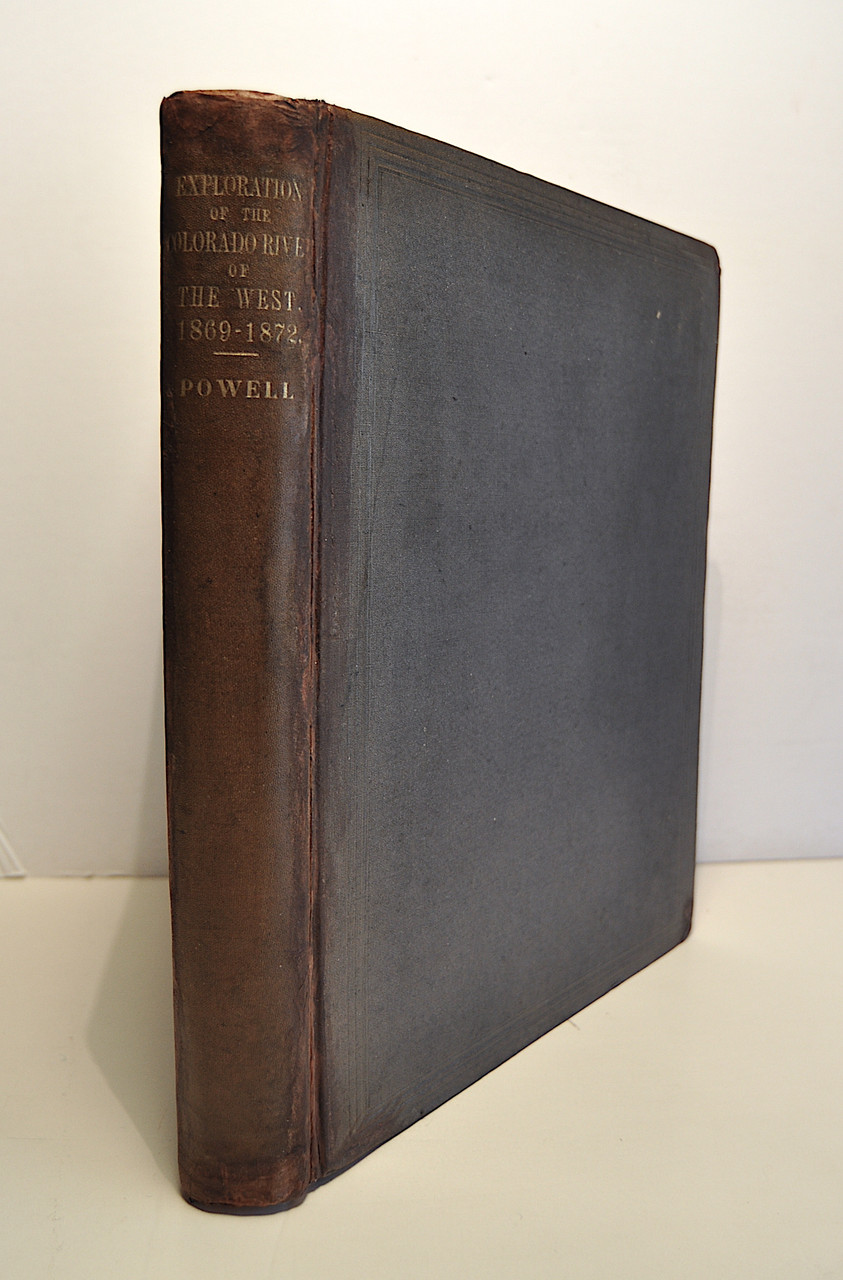 Powell, John Wesley; Exploration of the Colorado River of the West and Its Tributaries Explored in 1869, 1870, 1871, and 1872 Under the Direction of the Secretary of the Smithsonian Institution. 1st edition, U. S. Gov. Printing Office, 1875. Quarto, pp. half title, title, frontispiece, xi, 1, 291, frontispiece and 79 additional plates and illustrations, two folded map and profile in rear sleeve.

The book is complete and in the original brown cloth with ruled edges and gilt spine titles. The binding is tight and clean with light bumping of corners, spine lightly sun faded. The text, plates and maps are very clean, early small blind stamp of “W. W. Wheeler, East Saginaw, Michigan on half title. No other markings. In very good condition.

John Wesley Powell (1834-1902) was an American geologist and professor United States Army officer, explorer, and director of the USGS and other scientific institutions. He is best remembered for leading the 1869 three month scientific expedition down the Green and Colorado Rivers through the Grand Canyon. As second director of the USGS (1881-1894) he proposed a development plan for the arid regions of the western United States based on the climate of the region as it existed rather then one based on the building of reservoirs to allow the building of major cities in an arid region.
Powell supported the abolishment of slavery and on the eve of the Civil War he enlisted in the US Army and was soon commissioned a 2nd Lieutenant. He was to lose his right arm at the Battle of Shiloh. He remained in the Army, was present at several battles and earned the rank of Major.
After leaving military service he became a professor of geology at Illinois Wesleyan University and also served as curator at the Illinois State Natural History Society where he greatly expanded the geological collections.
In 1867 Powell was chosen to lead expeditions into the west and especially the Rocky Mountains and the region around the Green and Colorado Rivers. The success of these expeditions led to his being appointed in 1869 to explore the Colorado River and the Grand Canyon. The expedition set out in four boats on May 24th and completed the journey on August 30th. Powell compiled all of his observations and experiences in the form of a diary along with observations made during other expeditions in 1870, 71 and 72. The notes were published in 1875 by the United State Government Printing Office as Report of the Exploration of the Colorado River of the West.
The large folding map is of the region and the profile covers the river. Many of the plates and illustrations are of Grand Canyon scenes and were completed by Thomas Moran based on photographs taken during the expeditions. Powell documents the successful navigations of the Colorado River through what was at that time an uncharted region. His observations were the first really accurate ones of the geology and especially the stratigraphy and geomorphology. Powell also recognized the fact that the Grand Canyon was formed by the river cutting into the various strata as the land was uplifted. The work will always be considered a foundation piece on the exploration of the western United States and a cornerstone in the science of geomorphology.