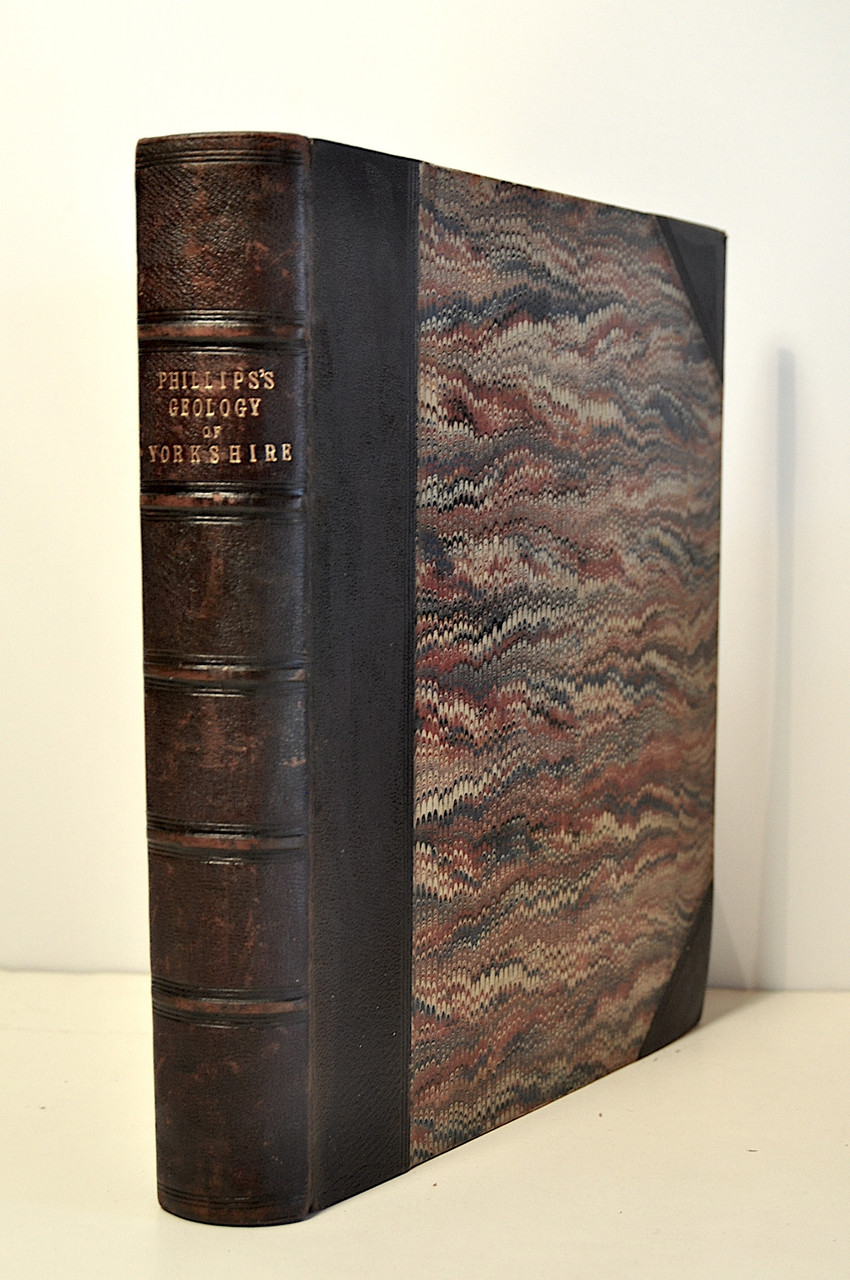 Phillips, John. Illustrations of the Geology of Yorkshire ; Or, a Description of the Strata and Organic Remains of the Yorkshire Coast, Accompanied by a Geological Map, Sections and Plates of the Fossil Plants and Animals. First editions of Parts 1 and 2. Part 1, Printed for the Author by Thomas Wilson and Sons, York, Yorkshire, UK, 1829. Part 2, Illustrations of the Geology of Yorkshire...The Mountain Limestone District. London, John Murray, 1836. & On a Group of Slate Rocks Ranging E.S.E. between the Rivers Lune and Wharfe, from near Kirby Lonsdale to near Malham; and on the attendant Phenomena. GSL Transaction, Vol. III, Sec. Series 1829, Quarto. Pt. 1, pp. xvi, 192, 10 maps and plates (9 hand-colored) and 14 b/w plates. Part 2, pp. xx, 254, 25 plates and maps (some folded). and Geol. Soc. London paper, pp. 19, 2 plates one being a folded profile, the other a hand-colored map.

The three works are complete and bound as a set in a contemporary half calf over marbled boards with ruled edges, raised spine bands and gilt titles with gilt upper text block edge and marbled end sheets. The binding is tight and clean, the text and all plates are very clean and bright. The work is inscribed to G. W. Wood Esq. of Manchester from the author. Wood was a subscriber to the original work and member of the Manchester Society of Natural History. A complete set in very good condition with the privately printed part one of the Geology of Yorkshire being very rare.
John Phillips (1800-1874)was a self-taught English geologist and surveyor. After being orphaned at age seven, Phillips was taken in by his Uncle William (strata) Smith, the famous geologist best remembered for his geological map linking England and Wales into a single geologic record and thus is considered the Father of English geology. Phillips learned much of what he knew  on geology, surveying and paleontology, at an early age from William Smith and that education influenced his own research methods and studies in geology. Phillips developed a keen eye for field observations by traveling in the field with Smith and assisting him on the gathering of data and surveying for Smith’s famous maps. Despite his lack of a formal education in geology, Phillips become one of the most respected figures in British geology. By introducing a statistical approach to palaeontology, he developed William Smith's ideas on using fossils to prove the correct stratigraphy of geological deposits. Phillips published the first global geologic time scale based on the correlation of fossils in rock strata, thereby helping to standardize terminology including the term Mesozoic, which he coined. He standardized the major geological eras  Palaeozoic, Mesozoic, and Caenozoic, and demonstrated the mass extinctions between them. Phillips introduced many of his ideas in his first major monograph the 'Geology of Yorkshire’. It is within this work that you see the influence of William Smith’s education on Phillips. He self published a limited printing of part one in 1829 and then published a second printing of part one through John Murray along with part two in 1835 and 1836. . The original printing of part one is very rare. That printing was the preparatory research for the publication of his two part ‘Geology of Yorkshire’ which launched Phillips career as a respected geologist.
In 1834 he was appointed Chair of Geology at Kings College London and then elected a Fellow of the Royal Society. Phillips published his 'Report on the Geology of Cornwall, Devon, and West Somerset'  in 1839, followed by Figures and Descriptions of Palaeozoic Fossils of Cornwall, Devon, and West Somerset  in 1841. In 1841 he joined the British Geological Survey. In 1844, Phillips was appointed Professor of Geology at the University of Dublin, and was awarded the prestigious Wollaston Medal by the Geological Society of London. He also published Memoirs of William Smith LLD, Author of the Map of the Strata of England and Wales, by his Nephew and Pupil, John Phillips FRS, FGS, etc. Having read the book I must say it remains the best insightful work on William Smith. In 1853 Phillips was appointed Deputy Reader in Geology at the University of Oxford and became a Professor in 1856 at which time he also was elected as President of the Geological Society of London. In 1860 Phillips proposed that geological evidence demonstrated that the Earth’s age was much greater than 100 million years, compared with the religious teaching of about 6000 years and in the same year, he followed up on this argument when he published his book 'Life on Earth: its Origin and Succession’.
The one person who had the most impact on Phillip’s life and future as a geologist was his uncle William (strata) Smith. He learned the basics of good field work, properly observing and identifying geological features, and fossils and mapping that data on well surveyed maps, under the guiding hand of Smith. We can only imagine the lose to the science of geology if Smith had not stepped in to help the young orphaned John Phillips. Phillips took that early tutelage from Smith and made countless geological field trips throughout Yorkshire leading to the first major geological work specific to Yorkshire County which was the two part 'Illustrations of the Geology of Yorkshire'. This remarkable two part work remained the main reference for Yorkshire geology into the 20th century.

Murchison, Roderick Impey; Siluria. The History of the Oldest Knoiwn Rocks Containing Organic Remains, with a brief Sketch of the Distribution of Gold over the Earth. 1st edition, London, John Murray, 1854.