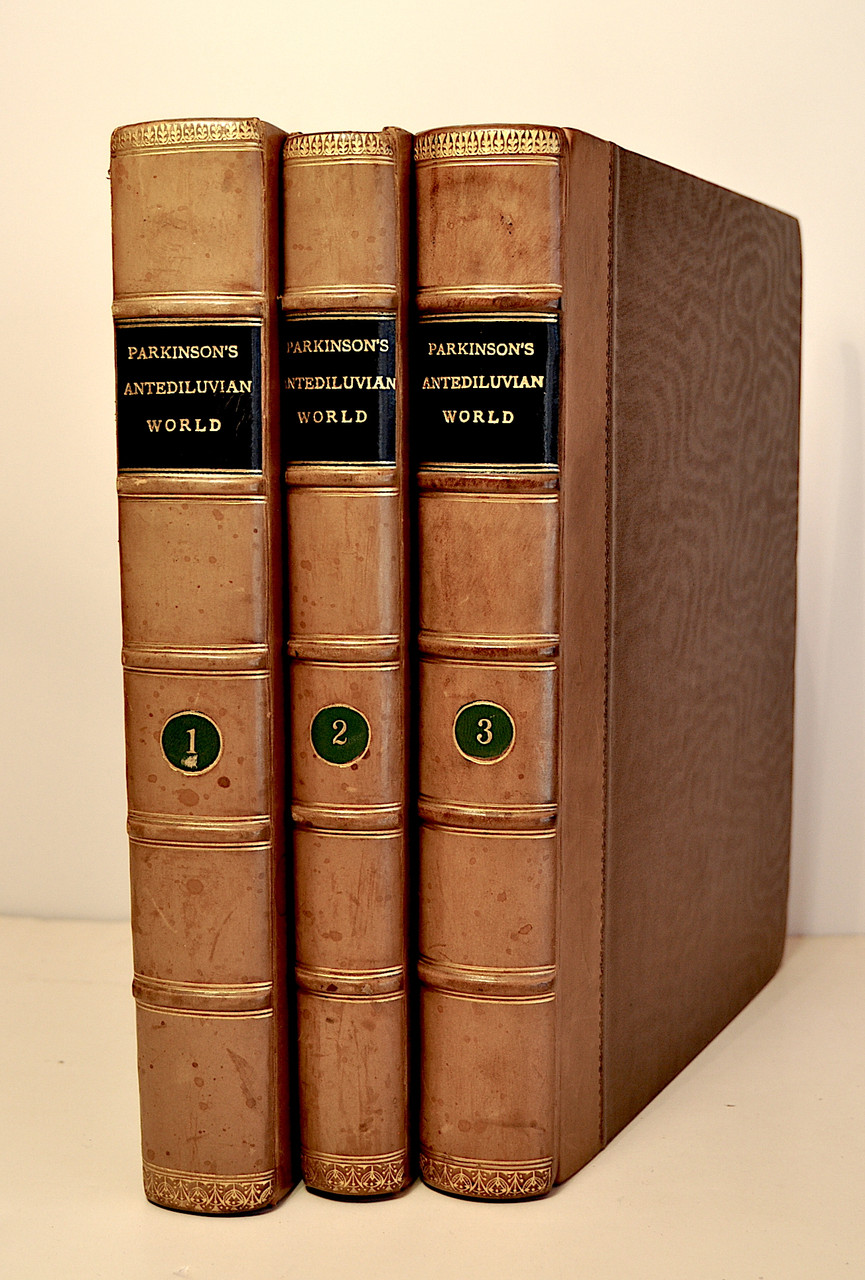 Product Description
Parkinson, James; Organic Remains of a Former World. An Examination of the Mineralized Remains of the Vegetables and Animals of the Antediluvian World; generally termed Extraneous Fossils. 2nd edition, London, M. A. Natali, 3 vols. 1833. Large quarto, vol. 1, pp.  xii, 460, 4, title-page vignette, frontispiece plate, and 9 hand-colored plates. Vol. 2, xiv, 2, 286, 8, colored frontispiece, title-page vignette and 19 colored plates with explanatory leave.; Vol. 3, pp. xii, 467, 7, colored frontispiece, title-page vignette, and 22 colored plates with explanatory leaves.
The three volumes are complete and in a 20th century half calf and linen with raised spine bands, gilt titles and gilt ruled borders. The bindings are tight and very clean. The contents and all plates are very clean and bright, free of any markings. A small private embossed stamp on the lower outer margin is the only previous ownership mark. Printers page numbering error on page 325 of volume one is found in all printings of the second edition. In near fine condition.
Parkinson (1755-1824) was an English physician and also a dedicated self-educated paleontologist. Within the medical sciences he is best remembered for the discovery of the palsy disease now known as Parkinson’s Disease. Within the geological sciences Parkinson is best remembered for “Organic Remains of a Former World”. The three volume pioneering treatise introduced the ideas of Lamarck, Cuvier, William Smith and John Farey to the public. It is one of the earliest attempts to systematically identify and interpret fossils. Parkinson provides both descriptions and supplements these with beautiful hand-colored engravings. In volume I he covers the plant kingdom and describes coal, lignite and peat as well as petrified wood, ferns, stems, leaves and fruits, mainly from Carboniferous and Tertiary strata. A short history of paleontological knowledge is also provided. Volume II treats corals, sponges and crinoids, and introduces the Linnaean system of taxonomic nomenclature. In volume III he describes several of the higher  classified fossil animals including echinoderms, mollusks, trilobites, arthropods, fishes, reptiles and mammals. The frontispiece in volume III is of a Ohio mastodon tooth. Parkinson's theoretical views are found in the third volume. He has become increasingly convinced that many fossils belonged to extinct species and expresses his conviction that the "days" of the Biblical account of Creation actually represented very long periods of Earth history. Also, while primarily devoted to fossils the work is of considerable interest to the  mineralogist, lapidary and gemologist because the author includes much information on silcified woods, amber, and jet, with remarks on their uses in the lapidary arts.