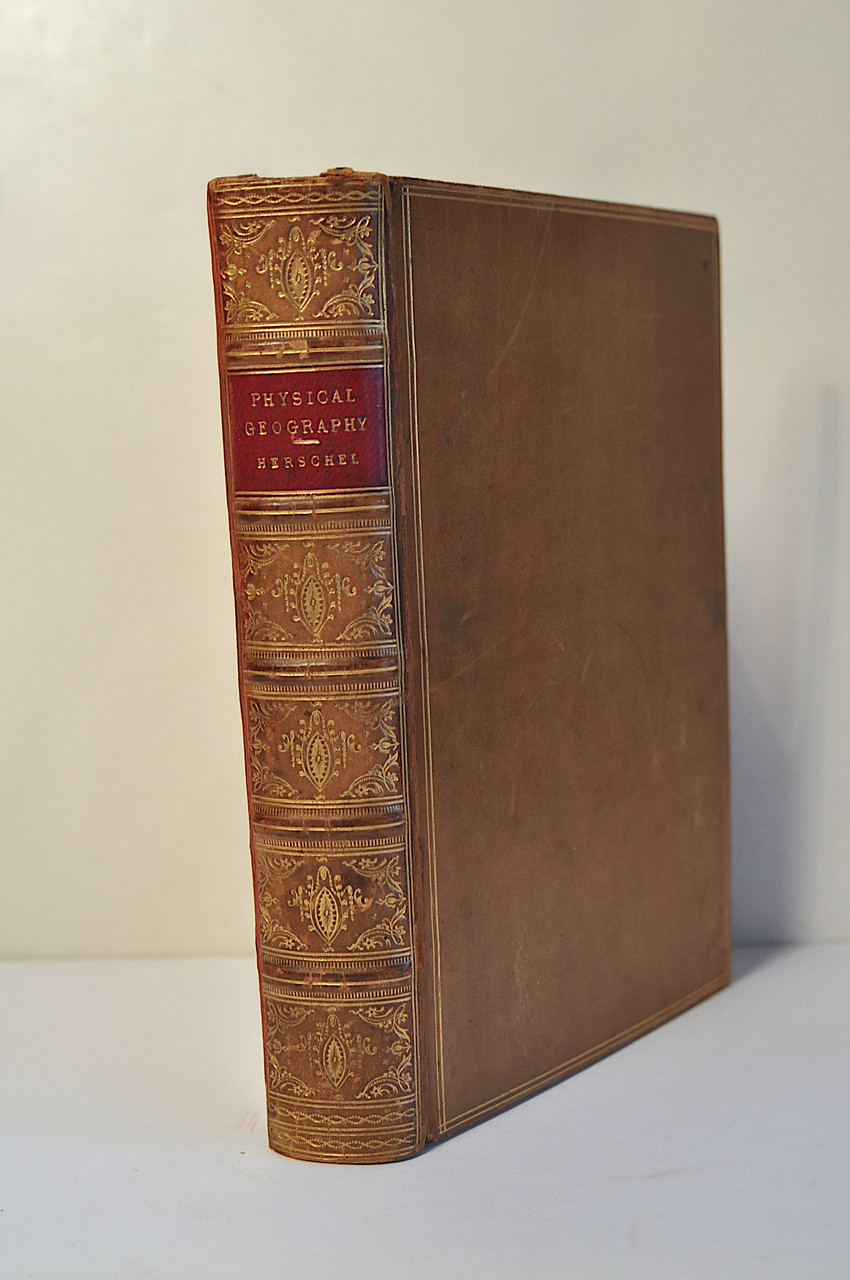 The work is complete and in the original full calf with decorative gilt spine panels, gilt spine titles on red, gilt ruled edges and marbled text block edges and end sheets. The binding is tight and very clean, text is very clean with minor foxing to maps, award presentation book plate on front paste down. In very good condition.

Sir John Frederick William Herschel, 1 Baronet (1792-1871) was an English mathematician, astronomer, chemist, geographer and inventor. Herschel was the originator of the Julian day system in astronomy, named seven of the moons of Saturn and four moons of Uranus. He made numerous other contributions to astronomy and published several works on that subject. In photography, Herschel invented the blueprint, made contributions to the study of color blindness and ultraviolet rays and the physics of light. His use of the telescope led him to new discoveries in the physical geography of the surface of other planets and moons. Herschel's 'A preliminary discourse on the study of natural philosophy', published early in 1831 as part of Dionysius Lardner’s Cabinet Cyclopedia, set out methods of scientific investigation with an orderly relationship between observation and theorising. He described nature as being governed by laws which were difficult to discern or to state mathematically, and the highest aim of natural philosophy was understanding these laws through inductive reasoning, finding a single unifying explanation for a phenomenon. This became an authoritative statement with wide influence on science, particularly at the University of Cambridge where it inspired the student Charles Darwin with "a burning zeal" to contribute to this work. In addition to his other contributions to science, Herschel wrote numerous papers and articles on meteorology, the telescope and physical geography. Some of these were written for the 1859 eighth edition of the Encyclopedia Britannica. His extensive treatise on physical geography for the Encyclopedia Britannica was also published as a stand alone work in 1861 and in some cases was issued in a special presentation binding. Herschel made minor revisions to the 1859 treatise and added some additional notes.

Barrera, Madame de (Anita de); Gems and Jewels their History, Geography, Chemistry and Ana. From the Earliest Ages Down to the Present Time…London 1860

Dana, James D.; The Geological Story Briefly Told. An Introduction to Geology for the General Reader and for Beginners in the Science. 1877.

White, Andrew Dickson; A History of the Warfare of Science and Theology in Christendom. 1899

Schindler, A. Hontum; The Turquoise Mines of Nishapur Khorassan. In, Records of the Geological Survey of India, Vol. XVII, Part 2, 1884.