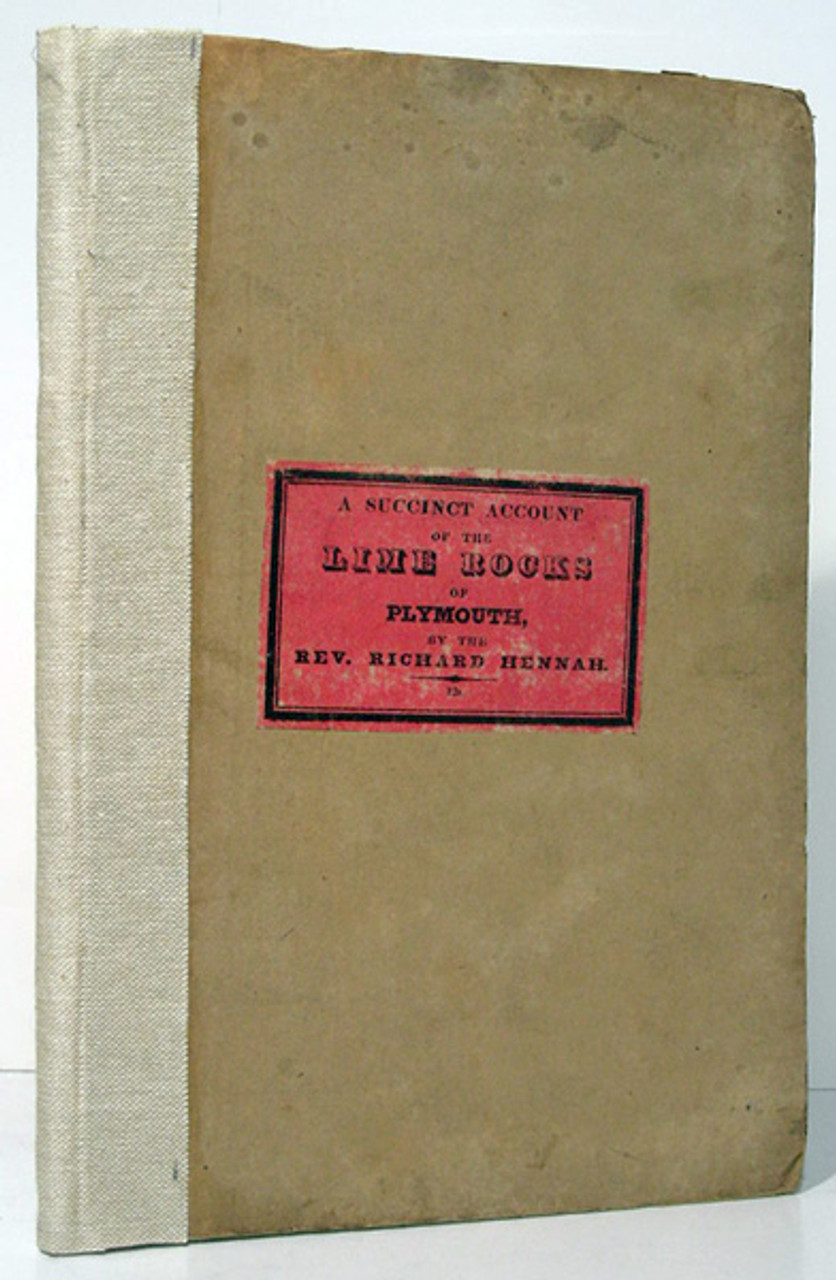 Hennah, Rev. Richard; A Succinct Account of the Lime Rocks of Plymouth, being the substance of several communications, read before the members of the Geological Society, in London, and partly printed in their transactions. With Ten Lithographic Plates, of some of the most Remarkable of the Animal Remains Found in Them…Printed for W. Curtis, Plymouth, and G. and W. B. Whittaker, London, by R. Bond, Plymouth, 1823. (first separately published edition).

This rare work is complete and in the original boards with printed title label, and recent cloth spine. The binding is tight and clean with light cover soiling, old illegible signature on pastedown and below that the book plate of Alan George Nicholson and also J. C. Thackray. Text is very clean, light foxing to the plates. In very old condition.

Richard Hennah (1765-1846) was and English cleric and the eldest son of the Vicar of St. Austle Church in Cornwall. After completing his studies at Oxford, he became his father’s curate. The region his family lived in was known at the time as one of the richest mining districts of Cornwall. This led to an interest by both the father and son in mineralogy and paleontology. They formed an impressive collection of minerals from Cornwall.

In 1804 Richard Hennah was appointed Chaplain to the Garrison of Plymouth and held that position until his death in 1846. The Plymouth region was rich in fossils and the  appointment allowed him to pursue his interest in paleontology. His diligent paleontological research  in Plymouth led to valuable contributions respecting the fossils of the Devonian Plymouth Limestone. Hennah announced his discovery of invertebrate remains in the limestone in a short letter in 1814 which was read before the Geological Society of London and then published in the Transactions in 1819. In April 1823 he published “A Succinct Account of the Lime Rocks of Plymouth”.

Prior to Hennah’s work, the Plymouth Limestone was considered barren of fossils. Hennah, proved the Plymouth Limestone to be fossiliferous, and through the use of fossils he traced the line of the limestone into White Sand Bay on the Cornish coast. Future geologists working in this region were only following what was the work completed by Hennah in 1819. His work remains a little known but major contribution to the history of paleontology and stratigraphy in England. The science of paleontology in England is indebted for the solid evidence Hennah provided for the existence of fossils in the Plymouth Limestone, and for the first delineation of those fossils. He also freely allowed access to his remarkable collection of Plymouth fossils to the geological community. His making the fossils available to Adam Sedgwick and Richard Murchison afforded these two geologists the principal source of evidence for determining the relative geological age of the Devonshire limestones. Upon his death, the collection was donated by his son to the Geological Society of London.