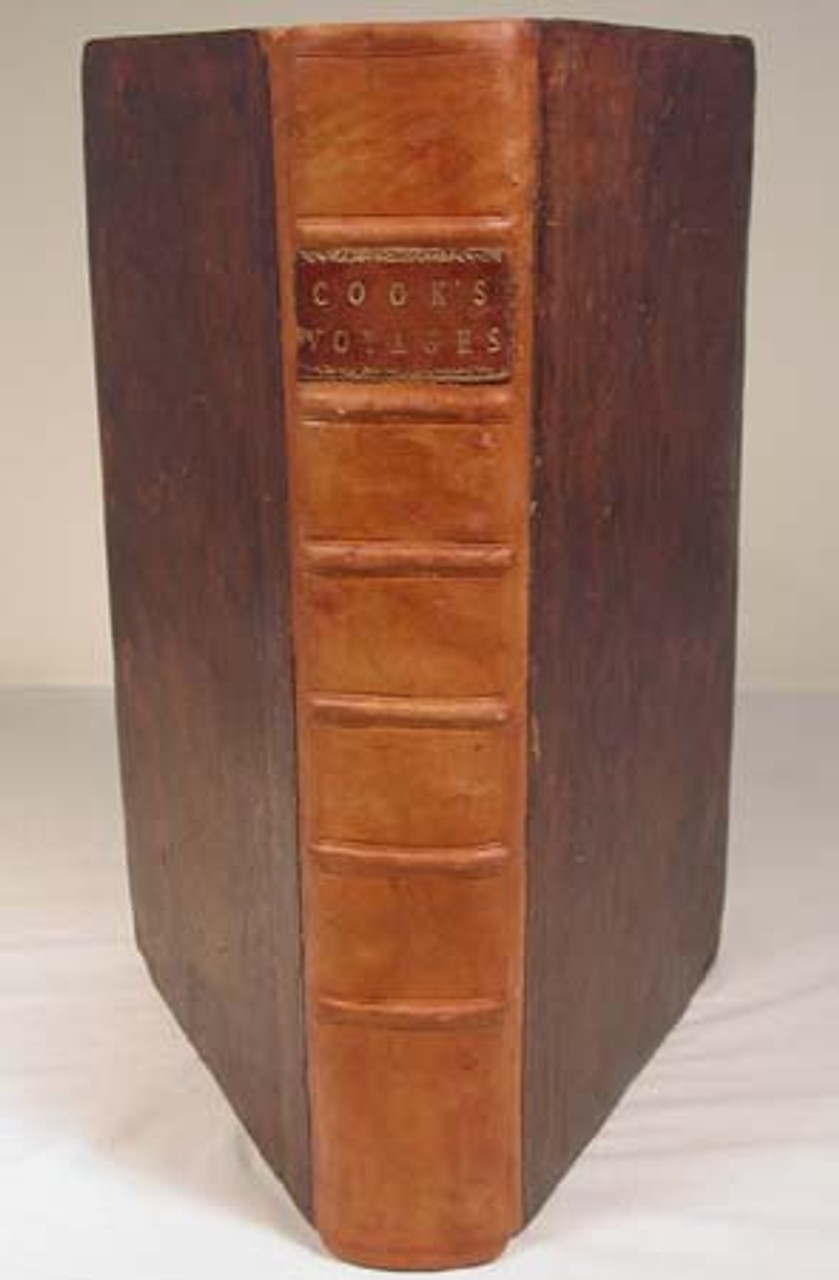 Anderson, George William; A New Authentic and Complete Account of Voyages Round the World, Undertaken and Performed by Royal Authority. Containing an Authentic, Entertaining, Full, and Complete History of Captain Cook's First, Second Third and Last Voyages . . . London: Alexander Hogg, 1784-1786. Folio, pp. iv, 5-655, directions to binder, 4 pages list of subscribers, 2 pages of ads, frontispiece portrait of Cook., 156 copper plates and maps including large folded map as called for in "directions to binder", many of the plates have multiple images which accounts for the count of 156 plates. This is the first issue of the book with no date on the title page and with page 5 starting with the word "Genuine" and later printings starting with "new genuine".

In contemporary calf boards with later spine and gilt titles, text, maps and plates are very clean and bright, free of foxing or tears, a very clean copy.

This is the massive compilation of the three voyages of discovery of Captain James Cook, one of histories greatest explorers. James Cook was born on October 27, 1728 in the small Yorkshire village of Marston. He commanded three voyages of discovery for Great Britain, and sailed around the world twice. These voyages led to the establishment of colonies throughout the Pacific by several European countries. Cook was an apprentice to a shipping company at age 18. When the Seven Year's War broke out he joined the British Navy at 27 in 1755 and spent considerable time New Foundland and the Lake Champlain area of North America. He soon earned command of his first vessel, the Mercury. In 1768, the Navy appointed him leader of a scientific expedition to the Pacific to observe the transit of Venus. During this voyage they also discovered and named the Society Islands, and then sailed for New Zealand, which was found to consist of two great islands admirably adapted for settlement "should this ever be thought an object worthy the attention of Englishmen." Cook became the first European to visit New Zealand. Then they sailed for Australia - New Holland as it was called - explored the east coast for two thousand miles, and took over the country in the king's name. Narrowly escaping disaster when the ship ran on a coral reef, they made for Batavia, sailing between New Holland and New Guinea, thus proving them to be two distinct countries. Cook also had secret orders to seek a southern continent geographers long believed kept the world in balance. The search for the southern continent ("Terres Australes" or lands in the south) was not successful on the first voyage. During his return trip to England in 1771, Cook was the first ship commander to prevent the outbreak of scurvy, by serving his crew fruit and sauerkraut to prevent the disease. In the following autumn he received another commission, "to complete the discovery of the Southern Hemisphere". He was given two ships, the Resolution and the Adventure, which he stocked with proper food stores, including lemons, enough to last for two years and which he knew would prevent scurvy. He left England in July 1772, and sailed by way of the Cape far south into the Antarctic Ocean. Cook sailed farther south than any other European. He circled Antarctica in Resolution, but the ice surrounding the continent prevented the sighting of land. After a run of "three thousand five hundred leagues" they put into Dusky Bay, New Zealand, where they landed domestic animals and planted English vegetables. The next few weeks were spent among the islands, and then once more they sailed to the southern ice. Cook sailed his ship right round the Pole, and the great southern continent of the old maps remained hidden. He turned for home, discovering and naming many islands; and after crossing a greater space of sea than any ship had ever crossed before, returned once more to England. And this time, during the whole voyage, they lost but one man by disease. The existence of the Antarctica remained unproved until 1840. Upon his return, Cook was promoted to Captain. In less then a year in July of 1776 Cook set sail on his third voyage, again in Resolution. On this voyage he had with him as navigation officer a young man of twenty-three, of outstanding navigational ability and a sense of location amounting almost to "second sight". His name was Bligh, to be known the world over in years to come as Bligh of the Bounty. Cook's mission was to look for a possible northern sea route between Europe and Asia. In 1778 he became the first know European to reach the Hawaiian Islands. Later in 1778 Cook sailed up the northwest coast of North America, and was the first European to land on Vancouver Island in British Columbia. All summer they explored the coast from Oregon northwards, through the Bering Strait, right up to Icy Cape, but there was no sign of an ice-free north-east passage; and Captain Cook decided to return to Hawaii in the Sandwich Islands. On February 14, 1779 Cook was stabbed to death by Hawaiian natives while investigating a theft of a boat by an islander. The expedition arrived back in England in October of 1780. Cook will always be remembered as a competent navigator, commander, and explorer, who endured numerous hardships in seeking new discoveries and yet cared deeply for those he commanded.