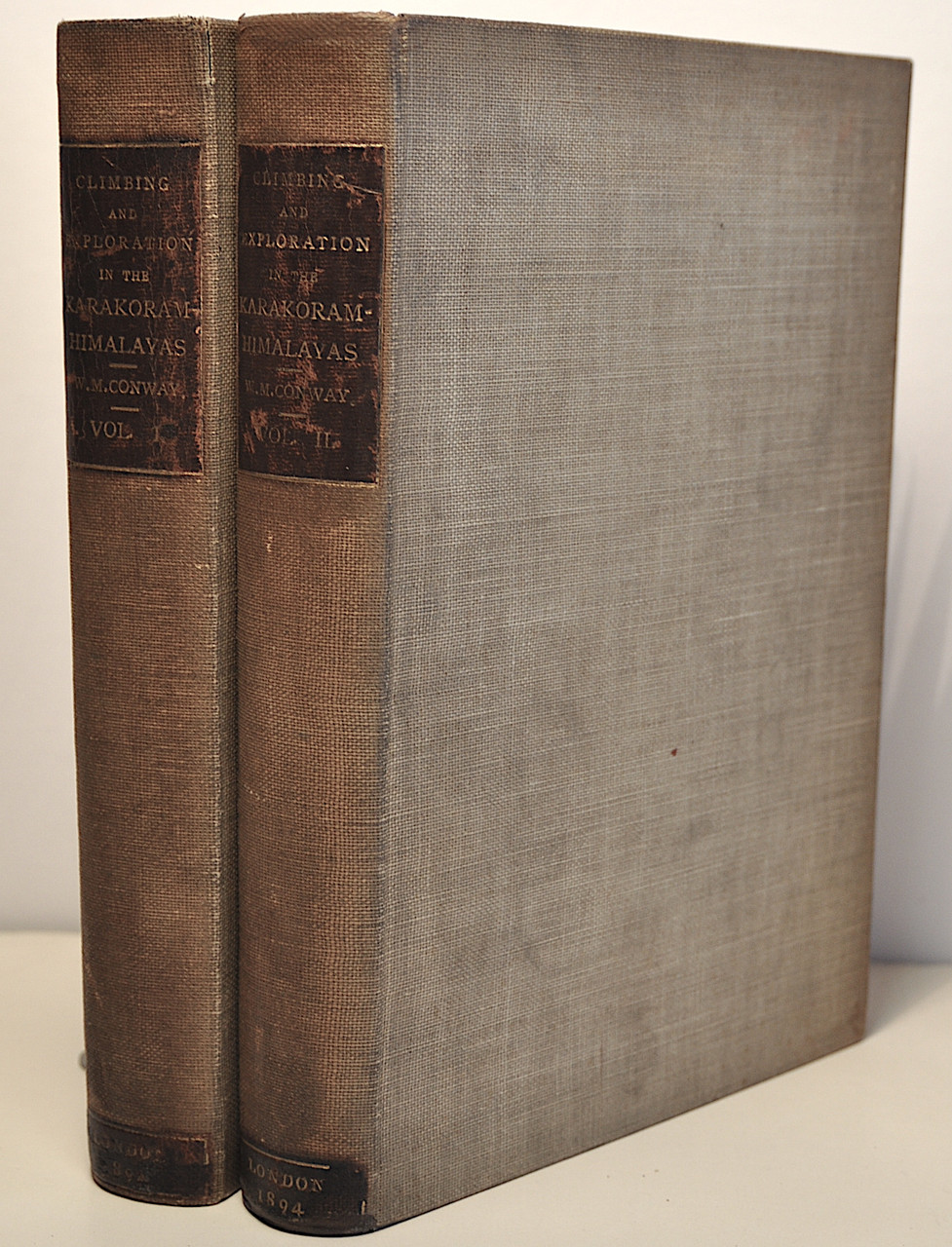 Product Description
Conway, Martin; Climbing and Exploration in the Karakoram-Himalayas. Two volumes, London, T. Fisher Unwin, 1894.  Quarto, xix, 360, xv, 361-709 pp., 300 illustrations plus duplicate proofs of some illustrations on Japan paper with original tissue guards.
Original cloth with leather/gilt spine labels. original marbled endpapers, large paper, spines lightly darkened, bindings a lightly dust soiled, top text block edges in gilt, very good condition. No. 142 of 150 of the deluxe edition, signed by author on frontispiece.
William Martin Conway, 1st Baron Conway of Allington (1856 –1937), was an English art critic, politician, cartographer and mountaineer, who made expeditions in Europe as well as in South America and Asia. In 1892, in the course of an exploring and mountaineering expedition undertaken under the auspices of the Royal Society, the Royal Geographical Society and the British Association, he made an ascent of Baltoro Kangri, claiming a world altitude record with a height of 23,000 ft (7,010 m).  In 1896–97 he explored the interior of Spitsbergen and the following year he explored and surveyed the Bolivian Andes climbing "Sorata" and Illimani. Conway is an author of several books on art and exploration with his work on the Karakoram-Himalayas being his most famous.
This expedition was the first major attempt to explore the Karakoram. The six-man expedition ascended the Hispar Glacier,and the Biafo and the Baltoro and achieved a height record. The two volume set is also particularly important for Conway's narrative of the expedition's sighting of K2 and reference to the mountain by its Indian Atlas letter and number code. The code was subsequently adopted as the standard name for the world's second highest mountain. The work is a cornerstone for every major library on mountaineering and the Karakoram. There was additionaly published a supplementary volume on the scientific results of the expedition, but  no deluxe edition was published. This was always offered separately. There was also published a map in two sections which was also sold separately. Thus complete sets are quite rare.