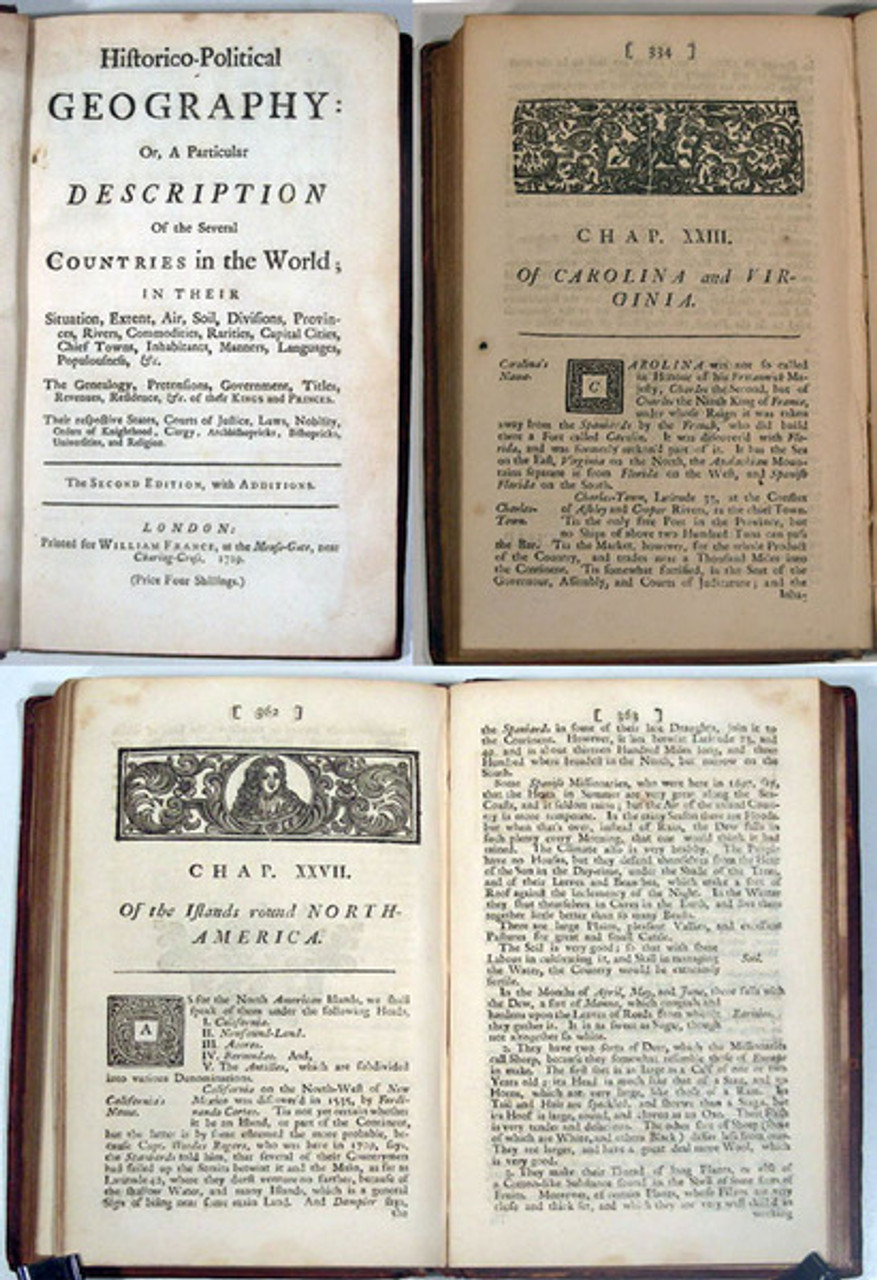 Paschoud, Reverend Mr.: Historico-Political Geography : or, a Particular Description of the Several Countries in the World; in their Situation, Extent, Air, Soil, Divisions, Provinces, Rivers, Commodities, Rarities, Capital Cities, Chief Towns, Inhabitants, Manners, Languages, Populousness, &c. The Genealogy, Pretensions, Government, Titles, Revenues, Residence, &c. of their Kings and Princes. Their respective States, Courts of Justice, Laws, Nobility, Orders of Knighthood, Clergy, Archbishopricks, Bishopricks, Universities, and Religion. The second edition, with additions. London : printed for William France, at the Meuse-Gate, near Charing-Cross, 1729. Octavo, 2, 395, (actually 411 due to mis-pagination from 385 to 395 which should be numbered 385 to 411, 5 (index). Lacks the dedication (i-xvi)  to “The Right Honourable The Lord Robert Mountague and Lord John Murray”. The pagination was not excised but was never bound in when originally bound.

The work is complete as originally bound and is in the original paneled calf with gilt titles. The binding is tight and clean, the text is very clean, inner hinges with archival tissue at spine edge, light browning at outer margin of paste down. Offsetting from page one to verso of title page indicating the lack of the dedication when originally bound. In very good condition.

A minister and teacher, the 1st edition of Paschouds’s Historico-Political Geography was printed in 1722 with the second edition published in 1729.
The first part of the book is devoted to Europe, Asia, the India, China, the known Pacific Islands, and Africa. From page 313 to the end the author describes America, Mexico and South America. Of particular interest is a chapter on “islands around North America”. Paschoud devotes a section to the island of California. The work finishes with a chapter on “Terra Incognitae”. Original printed copies of this work are very rare and seems to have several variations. Our copy lacks a dedication and it appears that the original owner chose to not have it bound in. The dedication is to “The Right Honourable, The Lord Robert Mountague and Lord John Murray”.